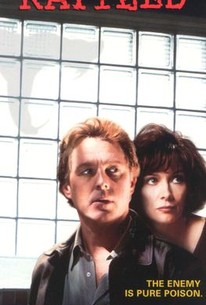 It would seem that the producers of the made-for-cable chiller Rattled had not only used Joseph Gilmore's novel Rattlers as their inspiration, but had also supped full of such horror movies as Poltergeist and Arachnophobia. The scene is Eden Valley, a luxurious housing development carved from a mountainous wilderness by architect Paul Donohue (William Katt). But things are hardly Eden-like in the valley (or, on second thought, perhaps they are!) when the development is suddenly invaded by a swarm of deadly rattlesnakes. Guilt-ridden by the realization that this serpentine invasion has been brought about by the explosives used to excavate the valley, Donohue takes it upon himself to stop the snakes -- and to overcome his mortal terror of the slimy predators. Rattled debuted February 14, 1996, on the USA network.

A PG-13 creature feature stripped of wit or fun, punctuating commercial breaks not with snake attacks but with family drama.

There are no featured audience reviews yet. Click the link below to see what others say about Rattled!