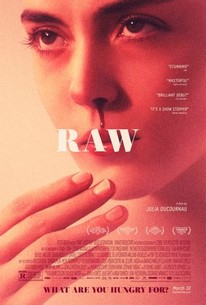 Critics Consensus: Raw's lurid violence and sexuality live up to its title, but they're anchored with an immersive atmosphere and deep symbolism that linger long after the provocative visuals fade.

Critics Consensus: Raw's lurid violence and sexuality live up to its title, but they're anchored with an immersive atmosphere and deep symbolism that linger long after the provocative visuals fade.

Critic Consensus: Raw's lurid violence and sexuality live up to its title, but they're anchored with an immersive atmosphere and deep symbolism that linger long after the provocative visuals fade.

Everyone in Justine's family is a vet. And a vegetarian. At sixteen she's a brilliant student starting out at veterinary school where she experiences a decadent, merciless and dangerously seductive world. Desperate to fit in, she strays from her family principles and eats RAW meat for the first time. Justine will soon face the terrible and unexpected consequences as her true self begins to emerge...

30 Incredible 2010s Directing Debuts That Left Us Begging For More
16 Awesome Horror Sidekicks: A Tribute to Our Favorite Not-So-Final Girls
Five Female Horror Directors Shaping the Future of the Genre

Raw is one of few films in the "female cannibal" canon, one that flips the power dynamic of women in horror so they are in control, rather than afraid of, their own carnal desires.

Julia Ducournau's feature film debut Raw joins the canon with the French teen-cannibal, coming-of-age story I didn't know I was waiting for.

It often takes decades for filmmakers to strike the right sense of balance Ducournau has achieved with Raw, and she is a director and writer with a formidable grasp.

Ably assisted by Marillier - and Ella Rumpf as Justine's controlling sis - Ducournau captures the more quotidian dread of fitting into cliques, losing your virginity and living up to family expectations.

The picture justifies the feminist analyses it will inevitably generate. It also offers much disgusting fun.

Some may claim the film is about a young woman discovering herself, but the writer-director's obvious delight in shock for shock's sake constitutes a major turn-off, no matter how efficiently made or well acted the film may be.

[The] straightforward plot serves as a perfect canvas for the varied and complex themes explored by Ducournau.

Mixing not so subtle metaphors of cannibal and carnal, Ducournau charges ahead like a juggernaut, one gross incidents after another with the similar energy that is usually reserved for macho directors (Gaspar Nöe comes to mind).

A rich coming-of-age tale that swaps in cannibalism for puberty, Raw is a powerful debut for Julia Ducournau.

Raw is the kind of expertly crafted feature debut that makes you immediately earmark its director as one to watch. This intelligent, female coming of age is a classic and deserves to be discussed alongside Ginger Snaps and Carrie

A sizzlingly sexy and dazzlingly stylish cannibalistic tale which gives the viewer plenty to chew on.

Sex, drugs and rock & roll. What more could you possibly ask for in your "Fucked-Up-Coming-Of-Age" movies... Cannibalism? No dramas. Raw has got you sorted.

Absolutely bloody disgusting and provocative, "Raw" is a wholly unique cinematic experience. Concerning a young vegetarian girl attending veterinarian school, the film follows her through the initiation week of ridiculous co-ed hazing. Her sister who has preceded her at the school eggs her on in her extreme transformation from timid and bookish to a crazy party girl with a taste for raw meat. There is body horror and gore galore, evoking some of the most uncomfortable reeling shock since watching Jeremy Saulnier's "Green Room". This horror is well balanced with the theme of sexual awakening, violently and erotically explored by Garance Marillier, Ella Rumpf, and Rabah Nait Oufella. They party hard, and things escalate fairly quickly into varying degrees of cannibalism. A fundamental theme underlying the characters and their institution is a constant desensitization. Very much a product of our times, instantaneous hedonism has pushed Marillier's character to seek thrills and fulfillment beyond a typical teen's basic ideas of sexuality and sensory experience. As for the target audience, I have a lot of trepidation recommending the film to a general audience. It is not only off-putting but extremely irreverent about the violence and sex, but it never loses momentum and there are quite a few laughs considering the subject matter.