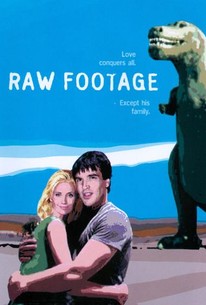 Blair Witch aesthetics merge with dysfunctional family comedy sensibilities in director Drew Filus' intimate look at what happens when a happy young couple attempts to capture a special family event on videotape. Devon and Monica have been happily dating for four years, so when Devon's mother and father make plans to renew their marriage vows, she requests that the pair make the trip to California and videotape the big event. Upon arriving in Los Angeles, Monica witnesses firsthand just how contentious Devon's family truly is, and begins to have second thoughts about her recent push to finally legitimize their relationship. Even worse, Devon's outspoken mother seems intent on sabotaging her son's relationship - a development that only serves to justify his girlfriend's doubts about the prospect of marriage. Over the course of the weekend, Devon gradually begins to realize just how lucky he is to have Monica, but is that feeling mutual?

There are no critic reviews yet for Raw Footage. Keep checking Rotten Tomatoes for updates!

There are no featured reviews for Raw Footage at this time.