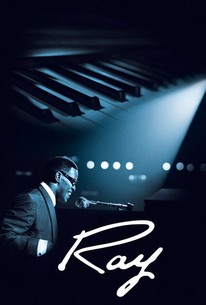 Critics Consensus: An engrossing and energetic portrait of a great musician's achievements and foibles, Ray is anchored by Jamie Foxx's stunning performance as Ray Charles.

Critics Consensus: An engrossing and energetic portrait of a great musician's achievements and foibles, Ray is anchored by Jamie Foxx's stunning performance as Ray Charles.

Critic Consensus: An engrossing and energetic portrait of a great musician's achievements and foibles, Ray is anchored by Jamie Foxx's stunning performance as Ray Charles.

Born in a poor town in Georgia, Ray Charles went blind at the age of seven shortly after witnessing his younger brother's accidental death. Inspired by a fiercely independent mother who insisted he make his own way in the world, Charles found his calling and his gift behind a piano keyboard. Touring across the Southern musical circuit, the soulful singer gained a reputation and then exploded with worldwide fame when he pioneered incorporating gospel, country, jazz and orchestral influences into his inimitable style. As he revolutionized the way people appreciated music, he simultaneously fought segregation in the very clubs that launched him and championed artists' rights within the corporate music business.

Julian Bond
as Himself

Richard A. Smith
as Til

Estella Denson
as Lady In Rain

Ray is filled with such pleasures, but it's hobbled by the too-familiar conventions of the musical biopic: with so many chapters of Charles's life to cover, Hackford's movie never finds a rhythm, a groove, to settle into.

As if we weren't sure before, now it's official: This is the year of the Foxx.

Jamie Foxx's all-encompassing performance in the title role more than justifies the early Oscar gossip it has generated.

Overall, ... the filmmakers have taken the line of least resistance, fashioning a familiar, 'inspirational' American tale about a man who overcomes personal trauma and experiences individual success. There's little richness in that.

It's hard to think of a more artless film depicting such a talented artist.

RAY suffers from having not enough story to warrant a feature film and too much talent wasted on caricatures of historical figures. RAY, like last year's BOHEMIAN RHAPSODY, is too focused on homage rather than telling a convincing and stirring story.

Jamie Foxx as Charles proves again that he may just be one of the most interesting actors of his generation. A subtle mix of impression, pathos and rare presence, Foxx holds your focus even when the film begins to prevaricate.

A powerhouse performance piece for Jamie Foxx and a rock solid biopic.

A compelling direction just as striking as it biopic lead. Ray plucks every chord with its flawless performance from Jamie Foxx, vibrant charm and scenic story. 4.5/5

Taylor Hackford has crafted one of the best biopics of a musician since Clint Eastwood's Bird. Jamie Foxx gives the performance of his career in the lead role of Ray Charles. This is a well crafted biopic and there are some very strong performances alongside that of Jamie Foxx. Ray is a superb film that has a near flawless plot, and great directing. Ray is one of the best biopics that I've seen in recent memory. Foxx's performance is just as solid as Joaquin Phoenix's performance of Johnny Cash in Walk the Line and Forrest Whitaker's performance of Charlie Parker in Bird. This is a solid film with an engaging dramatic story that recounts the fame and turmoil of one of the greatest musicians that ever lived. Jamie Foxx definitely delivered as Ray Charles, and of all his roles, this is his best role to date. Director Taylor Hackford paints a vivid portrait of Ray Charles' life and combined with Jamie Foxx' phenomenal acting, you have one unforgettable performance and film for that matter. This is an entertaining film that possesses some strong elements that the viewer simply can't ignore. The films imperfections forgive able because of Foxx's performance, he is what makes this film what it is, and his portrayal of Ray Charles is flawless, immaculate and unforgettable. I very much love to watch biopics, and Ray is a solid dramatic biopic that will please fans of Ray Charles as well as film fans. A must see if you're looking for a great drama film with strong performances.

Occasionally slushy, perhaps a shade on the long side, but very well acted and solidly entertaining nevertheless. Certainly a better portrait of Ray Charles than one would've expected.

A tremendous story on the best jazz singer ever, Ray Charles. Jamie Foxx stars in this and is his iconic role and the highlight of his career, and he deserved the oscar. The plot was a great journey through his life, and I felt the great feeling I had in Walk the Line, a sense of happiness for these great musicians. The whole cast did great, but Foxx truly is the best. I enjoyed the great music that they re did with Foxx singing, and he truly was fantastic. One of the greatest biopic films ever, and one of my favs.