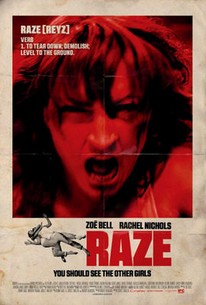 A young woman is abducted by an elite, secret society and wakes to find herself in the company of fifty other women who are, just like her, forced to fight for their lives in an unimaginable hell. (c) IFC Films

The tease of 50 gorgeous women fighting to the death has a classic grindhouse appeal, but Raze is strictly a "be careful what you wish for" proposition.

The performances and plotting are so impoverished that the picture deserves to be called "The From Hunger Games," and then promptly forgotten.

Prurient nonsense, a film only a couple of notches up from the women-in-prison films that were popular years and years ago.

If "Raze" had been released in 1975, Quentin Tarantino would never shut up about it.

The lack of story and relentless suffering make "Raze" appealing for hard-core genre fans only.

"Raze" is a sweaty, queasy, bruising experience - and a superbly crafted film.

Raze is a punch to the gut from beginning to end and should satisfy even the most hardcore of fighting enthusiasts.

With plots as flimsy as the one presented here, there's a tendency to favor spectacle over character development, and it's no surprise that Raze struggles to balance the two.

The fights are visceral and gruesome without going too far, but by the sixth or seventh bout, the lack of variation becomes noticeable.

Stephen Danay
Under the Radar

Raze ultimately becomes little more than a tiresome endurance test ... Still, much like a less accomplished The Raid, some viewers may respond to its bloody, take-no-prisoners style.

The film favors brutal violence over any sort of social commentary, making its half-hearted stab at female empowerment feel hollow.

As violent as it is, Raze is refreshing.

Surprisingly likeable despite its basic premise.

This is a good little genre movie that, somewhat, reminds me of Hostel. In that there's a secret society of elites that forces others, in this case women, to fight to the death for their own amusement and entertainment. In Hostel it's more kidnapping tourists so they can be tortured to death by paying costumers, if I remember correctly. And, also like Hostel, you're left wondering how this secret society works and what led to their formation. I wish they had gone more in depth into this society, but, and this may have been a conscious decision, they decided to leave it out just in case they wanted to come back to it in a sequel, or prequel, which, if it does happen, I hope explores the secret society more in-depth. With that said, this movie obviously isn't perfect. Sometimes the scripting and the dialogue leave a lot to be desired. But, by and large, I found this film to be fairly enjoyable. In works in part because of Zoe Bell. Zoe isn't what one would call a great actress, but she is a fucking badass in this movie, but there's also a certain vulnerability about her that makes her, in spite of the horrible things she's forced to do, in order to protect her daughter's life, you still empathize with her and the character. The character development itself isn't what one would call fantastic, but at least they make somewhat of an effort. The villains are the ones that are the most interesting and Doug Jones and Sherilyn Fenn do a fantastic job at portraying these wealthy elites that justify their own actions, gleefully too I might add, by saying that they're trying to find the next woman, the champion, to join their secret society because she'd be closer to what a real woman is supposed to be like, or something like that. That part is a little hazy, the whole explanation for why the secret society is doing this, but the point is that Doug and Sherilyn are great here. The acting here is fairly solid, honestly, from all concerned. There's this cool little thing that they do before each fight where they show the names of who's fighting up next, Sabrina vs Cody, just as an example. That's not necessarily all that cool, but what's cool is that during the third act, where Sabrina fakes her death to be taken out to the morgue or whatever it is they would call it there and she kills the people that were gonna prepare her body. She comes out of the room and it just says 'Sabrina vs Everybody'. Which I thought was really cool, because it pretty much tells you what's gonna happen. And it doesn't disappoint, let me tell you. There's a wish-fulfillment element to it as, I'm fairly certain, that on the deep web there's some sort of secret societies that pull of shit like this and the third act shows what, I'm sure, plenty of people would like to do to those that are involved in the arranging of the fights and those that actually pay for this sort of sick 'entertainment'. So this third act doesn't disappoint in the slightest. The way the film ends, the door is definitely open for a sequel or, preferably, a prequel that would shed more light onto this secret society. I know a lot of people won't like this movie, and I can understand how there are parts of the film that aren't up to snuff, but I generally enjoyed this movie and thought it was a solid movie. Better than I was expecting, for sure. It's on Netflix, so watching this won't cost you absolutely anything.

Conclusive proof that it's no more fun watching a bunch of women beat the crap out of each other than it is watching men do the same. Ugly and soulless, only star and stuntwoman extraordinaire Zoe Bell's commitment gives any reason to watch this filth.

This exploitation film that is all about violence, was directed by Josh C. Waller. Written by Robert Beaucage, Kenny Gage and Josh C. Waller it has a lot for the lovers of this genre... but I have to say, am not one of them! The film premiered on April 21, 2013 at the Tribeca Film Festival and stars Zoë Bell, Rachel Nichols and Tracie Thoms as women forced to fight for the twisted entertainment of the wealthy elite. [img]http://www.themarysue.com/wp-content/uploads/2014/01/raze-580x214.jpg[/img] The story of Sabrina (Zoë Bell), who is kidnapped along with 49 other women by the diabolical husband and wife team of Elizabeth (Sherilyn Fenn) and Joseph (Doug Jones). The women are told that they will fight to the death for the entertainment of a group of bored rich people. If they lose or refuse to fight, a sniper will kill their loved ones... Waller tried to treat the film "as seriously as if it were men that were abducted and forced to fight each other." He tried really hard to avoid stereotypes typically seen, such as nudity, as he felt that viewers would not see this in an all-male exploitation film. Of course, this is not a film which will appeal to everyone... it is for lovers of the genre only, and most of the others would be overwhelmed by the violence and the level of the exploitation.