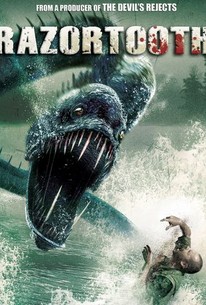 Four college students take a trip to the Florida Everglades in hopes of earning some extra credit for biology class, and instead find themselves locked in a battle to the death against a genetically modified super-eel created by their own professor. They thought they were going out into the field to conduct some standard research on the common eel, but what these students didn't realize is that their scheming professor has been playing God behind closed doors. Now, in order to make it out of the wilderness in one piece, these students will have to capture and kill the perfect predator. But as the hunt gets underway, the desperate group realizes that an old friend of the professor's is also on the hunt for the very same fish. As if dueling scientists weren't enough to contend with, the local sheriff shows up gunning for two escaped convicts who will stop at nothing to ensure they remain free men. As the struggle for survival gets underway, it quickly becomes apparent that mankind may have just moved down a peg on the food chain.

Gloria Payne
as Woman in Shower

There are no critic reviews yet for Razortooth. Keep checking Rotten Tomatoes for updates!

Mostly tedious and a little gory