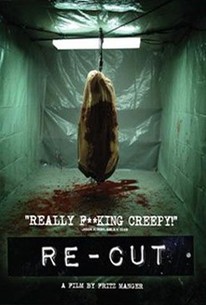 A television reporter unearths a shocking secret while investigating the horrific murder of two rural Wisconsin twins in this reality shocker purportedly assembled from the found footage of a missing news crew. Meredith Phillips thought she had found the story that was going to make her famous. But now the deeper she probes for facts, the more obvious it becomes that she's digging her own grave. When the terrifying truth is finally revealed, it will already be too late for Meredith and her crew. For the rest of us, the horror has only just begun.

There are no critic reviews yet for Re-Cut. Keep checking Rotten Tomatoes for updates!

There are no featured audience reviews yet. Click the link below to see what others say about Re-Cut!