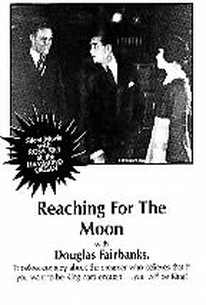 Daydreaming clerk Douglas Fairbanks discovers that he's of royal blood. In fact, if his information is correct, he's next in line for the throne of Vulgaria. Leaving his job behind, Fairbanks travels to the home of his forefathers to quell a takeover attempt by villainous nobleman Frank Campeau. He saves the day with his usual eye-popping athletics...and then screenwriters John Emerson (who also directed) and Anita Loos pull a fast one on the audience. Among the bit players in Reaching for the Moon are Erich von Stroheim and Douglas Fairbanks' friend and "mascot" Charlie "Injun" Stevens.

Eugene Ormonde
as Minister of Vulgaria

Critic Reviews for Reaching for the Moon

[Fairbanks] lands in a cauldron of royal cloak-and-dagger intrigue and faces it like a two-fisted American increasingly exasperated by the assassination attempts.

There are no featured reviews for Reaching for the Moon at this time.

Reaching for the Moon Quotes