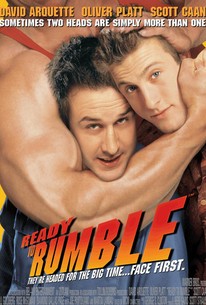 Critics Consensus: Humor at its lowest that isn't funny for kids and is insulting to adults.

Critics Consensus: Humor at its lowest that isn't funny for kids and is insulting to adults.

Critic Consensus: Humor at its lowest that isn't funny for kids and is insulting to adults.

Wrestling champion Jimmy King is everything die-hard wrestling fans Gordie Boggs and Sean Dawkins would love to be. A dreamer, an athlete, a true champion - with his crown, cape and scepter, he is a giant in his profession. Other wrestlers can only tremble in fear of his deadly finishing move, "The Crown" - a two-handed flying slap. Gordie and Sean live at home, have dead end jobs and no girlfriends, but none of that matters on Friday night when they at last get to see their idol live and in person at the local WCW coliseum. But as the lights swirl and the Nitro girls dance, something goes horribly wrong for the King. He is ambushed by a ring-full of hostile turn-coats. At the match's shocking end, Jimmy King takes a mighty, career-ending fall. Heartbroken and in shock, Gordie and Sean nonetheless decide to embark on an odyssey of discovery to root out their fallen hero. In space fourteen of the St. Francis Motor Court, they come face to face with a drunken, bitter Jimmy King, a phony with a made-up past whose inspirational phrases were scripted. But Gordie and Sean will not be discouraged. Beneath the beer gut and grizzle, they still see glimpses of their hero and vow to do whatever it takes to restore their King to his throne, no matter how many rules - or bones - get broken in the process.

Diamond Dallas Page
as Himself

Maryedith Burrell
as Nun No. 1

Anne Christianson
as Nun No. 2

Marne Dupere
as Nun No. 4

Jeff Podgurski
as The Chewer

Adam Tomei
as Siamese Twin No. 1

Bam Bam Bigelow
as Himself

Stephanie Bellars
as Herself

Juventud Guerrero
as Himself

Van Hammer
as Himself

Curt Hennig
as Himself

Prince Iaukea
as Himself

Disco Inferno
as Himself

Billy Kidman
as Himself

Rey Mysterio Jr.
as Himself

Saturn V
as Himself

Randy Savage
as Himself

Booker T.
as Himself

Sid Vicious
as Himself

Forrest Fyre
as Herself

"Mean" Gene Okerlund
as Himself

Tony Schiavone
as Himself

Mike Tenay
as Himself

Michael Buffer
as Himself

Charles Robinson
as Himself

Critic Reviews for Ready to Rumble

PG-13 movie has a lot of R-type material.

Isn't worth the price of admission, even for wrestling fans.

Unless wrestlers playing wrestlers is your cup of tea, better plan on saving the pennies for the WWF's next pay-per-view special instead.

Ready to Rumble manages to insult not only pro wrestlers but also their fans.

Yes, film fans, there is a new worst movie of all time.

The entire movie is essentially an attempt to fill silence.

A movie made by yahoos for yahoos...the cinematic equivalent of a body-slam in which the viewer is on the receiving end.

Features a shameless cross-promotion we had better get used to in this era of media conglomerates. The script could be mistaken for the portfolio of the Time-Warner empire.

Fans of ***- and feces-based humor will be rolling in the sticky, sticky aisles. Others may be only slightly amused.

It's less about being good and more about existing to suck dollars out of wallets.

Ready to Rumble is a sloppy, obvious movie, grasping desperately at the thinnest venier of comedy.

Audience Reviews for Ready to Rumble

As World Championship Wrestling (WCW) was going bankrupt, they needed to come up with other ways of earning money, and decided to jump into the film business. Little did they know that within two years, they'd be out of business and their rival, World Wrestling Entertainment (WWE), would pick up their idea and turn it into a billion dollar industry. Ready To Rumble features two life long wrestling fans, intent on restoring their favorite wrestler, The King (Oliver Platt), back to his former glory. Against all odds, they inspire The King to get back in shape, and compete for one last chance at glory. It's hard to remember through all the intense action and dangerous moves, that professional wrestlers are actually actors, who need to learn a script and play a character, on a weekly basis, so why not put them in movies. It has worked out very well for WWE Films, which has produced some great films, including; The Marine, 12 Rounds, and The Call, but what about WCW's only foray into the movie business? David Arquette was the perfect choice to play this wacky wrestling freak, and he actually had great chemistry with everyone involved. The story told in Ready To Rumble may lack the vulgarity and insanity that has become associated with most modern comedies, but it was certainly something different and did have it's movements of hilarity.

Oh, I still know who consider ready to Rumble to be a big time flop, but i still recognize it as an underground, cult classic. it isn't always funny, but It's ending, and Wrestling scenes are very entertaining. This film was average in it's humor, but I still enjoyed more than I thought. Most hated the Unfunny jokes, and stupid plot points, but everything else is pretty good. It is worth a watch atleast if you like Wrestling, Or Comedies.

wierd and stupid but has some funny lines