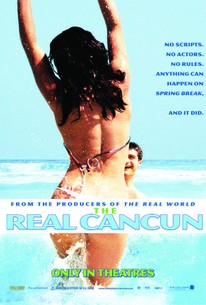 Critics Consensus: The footage is predictable and rather tame, and most of the people are uninteresting.

Critics Consensus: The footage is predictable and rather tame, and most of the people are uninteresting.

Critic Consensus: The footage is predictable and rather tame, and most of the people are uninteresting.

Following the style of the reality-based programming on the FOX network, The Real Cancun is a feature-length effort to capture R-rated footage of a group of upper middle-class college students on spring break in Cancun, Mexico. Made by the Bunim/Murray production team (responsible for MTV's The Real World) and released in the vulgar wake of Jackass: The Movie, this 90-minute movie features 16 conventionally attractive 18- to 23-year-olds coming from different colleges across the country and encouraged to party like they never have before. There's Alan, the innocent boy from Texas; Casey, the would-be model from Florida; Jeremy, the ladies' man from Arizona; Brittany, the pretty girl from California; and so forth. Romantic pairs, best friends, twins, and other couples are also figured into the group in order to boost the likelihood of hooking-up and/or breaking-up theatrics. Six camera crews follow the group around 24 hours a day during the weeklong vacation in order to catch the highest possible amount of alcohol consumption, nudity, and sexual activity. Participants give interviews and provide relationship updates in-between the dancing, drinking, sunbathing, and general partying. The Real Cancun was filmed in March of 2003 and released theatrically only a month later. Directed by Rick de Oliveira, who made his directorial debut in 2002 with the straight-to-video title Who Wants to Be a Playboy Centerfold?

Laura Ramsey
as Herself

Critic Reviews for The Real Cancun

Hardly qualifies as a movie.

Sadly, even lovers of cheesy dance music will find it hard to ignore The Real Cancun's flaws.

... I found it fascinating.

Shoddy craftsmanship and uninteresting subjects ... sink this spring-break movie faster than an outbreak of Leginnaires' disease on a vacation cruise liner.

True exploitation filmmaking. Watching it is getting fleeced.

It's not quite the end of civilization as we know it, but it's not a good sign.

As if we needed feature length versions of MTV's "The Real World," served up this weekend is two hours of Cancun hysteria. Is it real? Yup - real dumb.

It's a document of the decline of Western civilization, and no, it's not because everyone in it drinks, has sex, and parties but because when asked if someone could film it, they said yes.

Perversely, disturbingly entertaining, and as much of a glimpse into the dark depths of human nature as a Dostoevsky novel.

Audience Reviews for The Real Cancun

For some reason I actually wanted to watch this when it first came out. Now that I have watched it, I am glad I missed out on it for as long as I did. Should have kept it that way. This has no real story at all except a bunch of teens getting drunk and acting like skanks (and I include the boys in that too, no sexism here!). Maybe I am just too darn old and showing it, but I could barely tell one from the other, they were all so tedious and interchangable. It is of no surprise to me at all that none of these people went on to bigger things.