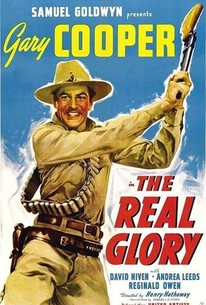 Set during the turn-of-the-century Moro uprising in the Philippines, The Real Glory stars Gary Cooper as an American Marine doctor and David Niven and Broderick Crawford as a pair of rowdy mercenaries. While staving off the insurgent Moros, Cooper must also combat a cholera outbreak. Once this matter is disposed of, Cooper joins Niven and Crawford in attempting to blow up a dam built by the Moros to cut off the American fort's water supply. After all this activity, it's small wonder that Cooper elects to return to private practice in the States with his new bride Andrea Leeds. While The Real Glory never skimps in the action department, the film is somewhat lacking in historical accuracy: the Moros were hardly the bloodthirsty savages depicted herein.

Henry Kolker
as The General

Elmo Lincoln
as US Army Captain

Critic Reviews for The Real Glory

Cooper as the military doctor, who arrives with a present of orchids and a colonel's gallstone for his friends, has never acted better.

Gary Cooper is always at his best playing American heroes.

There are no featured reviews for The Real Glory at this time.