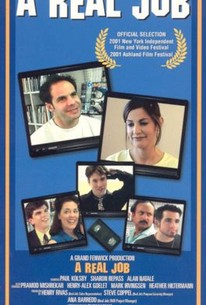 A man gives up his dream job for the woman he loves, only to risk losing both her and his old friends in this independent comedy-drama. John St. Clair (Paul Kolsby) works as a clerk as a video store; John loves movies, knows them like the back of his hand, and enjoys his job, but he's fully aware that most folks would think a 38-year-old man ought to be doing something a bit more lucrative and responsible for a living. John is also single and none too thrilled about it, and when he meets Denise Hunter (Sharon Repass), a business executive, he thinks he may have found the woman he's been looking for. John and Denise hit it off, but while Denise is quite taken with John, she isn't sure she can get serious about a middle-aged man who doesn't have a "real job." Nathan (Mark Irvingsen), who knew John from college, steps in to help, and helps John land a job with Goldbar, Inc., a large multimedia firm who are moving into video retailing and marketing. John adjusts smoothly to corporate life, but he suddenly faces a moral dilemma when he learns Goldbar wants to buy up the independent video store where he worked and put it out of business, leaving his friend Vinny (Alan Natale) and boss Hrundi (Pramod Mishrekar) with nowhere to go. He also finds his new goal-oriented personality doesn't agree with Denise.

There are no critic reviews yet for Real Job. Keep checking Rotten Tomatoes for updates!

There are no featured reviews for Real Job at this time.