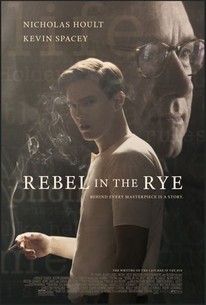 Critics Consensus: Rebel in the Rye attempts to dramatize J.D. Salinger's life and creative process, but falters with a lack of dramatic impetus or a cohesive thesis about the reclusive author.

Critics Consensus: Rebel in the Rye attempts to dramatize J.D. Salinger's life and creative process, but falters with a lack of dramatic impetus or a cohesive thesis about the reclusive author.

Critic Consensus: Rebel in the Rye attempts to dramatize J.D. Salinger's life and creative process, but falters with a lack of dramatic impetus or a cohesive thesis about the reclusive author.

Rebel in the Rye Videos

Rebel in the Rye Photos

This biopic of legendary author J.D. Salinger (Nicholas Hoult) details his relationship with socialite Oona O'Neill (Zoey Deutch), his experiences fighting in World War II, and his writing process for The Catcher in the Rye. Kevin Spacey and Sarah Paulson co-star. Written and directed by Danny Strong, Rebel in the Rye made its world premiere at the 2017 Sundance Film Festival.

News & Interviews for Rebel in the Rye

View All Rebel in the Rye News

Critic Reviews for Rebel in the Rye

For the film's UK release, nearly three years after its limited theatrical unveiling in the US, Spacey has unsurprisingly been scrubbed from its cover art. The same treatment should have been extended to the film itself.

Danny Strong's film suggests dramatic Tetris, and it leeches J.D. Salinger and his process of any mystery.

We see the young Salinger stuck at his desk lighting matches and throwing pages in the garbage. We see his trembling hand hovering above a page. There is sometimes music. When all else fails, there's a montage.

A faithful and often moving look in the life of J.D. Salinger, a warts-and-all portrayal that succeeds in large part because of a dynamically persuasive performance by Nicholas Hoult.

Nicholas Hoult leads a stacked cast in the biopic Rebel in the Rye, but the movie doesn't reveal much that isn't already known about the legendary J. D. Salinger.

With Rebel in the Rye, we get a solid, well-acted and basically standard biopic.

From its on-the-nose title to the standard biopic conventions Rebel in the Rye/i> could probably best be described by Caulfield himself: 'You never saw so many phonies in all your life.'

For all its dependence on the truth, Rebel in the Rye comes across feeling like a big phony.

Director Danny Strong sticks to a standard biopic approach, infused with familiar dramatic period vibes. This makes the film feel rather long and tiresome, even with some sparky screenwriting and a committed central performance by Nicholas Hoult.

For the most part, it serves as a workable, watchable entry point for the uninitiated. Those looking for more in-depth observations, especially about the creation of The Catcher in the Rye, might be better of reading books on the subject.

What's telling is how phony the reverence toward Salinger seems.

It's a poor proposal that only gets redeemed by the chemistry that arises between Hoult and Spacey. [Full Review in Spanish]

Audience Reviews for Rebel in the Rye

There are no featured audience reviews yet. Click the link below to see what others say about Rebel in the Rye!

Rebel in the Rye Quotes