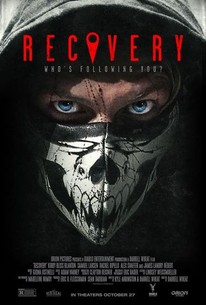 The night before their high school graduation, Jessie and her friends are guided by a 'Find My iPhone' app to recover her lost device from a house whose demented tenants are hell bent on making her a flesh and blood member of the family

This gory thriller begins with selfish, unsympathetic characters and then takes them through a clumsy, routine "trapped in a house with a sadistic maniac" scenario with all its seams showing.

I've always said that the home invasion thriller genre is one that is overpopulated with generic films that, while some being good, don't really do much to expand within the boundaries and tropes associated with the genre. Last year's excellent Don't Breathe tried to expand on that, making it a reverse home invasion film, where the people doing the invading are hunted down by a blind man with something to hide. It was tense and it was gripping, great concept with even better execution. This brings us to Recovery, the film I watched last night and the one that I am reviewing right now. There's no denying that there's certain similarities to Don't Breathe, at least conceptually speaking. I suppose you could say it's a reverse home thriller as well, but I don't really see it that way, since the characters in this movie don't go into the house with malicious intent in mind. They go in trying to retrieve Jessie's phone, that was taken by this random girl she met earlier in the night. They thought this girl, Kim, either disappeared or just ran off with her phone. They trace the phone, through this app, back to this house in a very seedy neighborhood. Of course, things don't go as planned once the owners of the house, who use it for their own...misdeeds shall we call it, return and then the movie turns into every home invasion thriller you've ever seen. While the movie obviously doesn't have a big budget, you can tell that right from the start, it's a fairly serviceable movie at best. There's nothing technically wrong with it, at least from how I saw it. The problem I have is that the film reveals its cards right out of the gate. Essentially, the villains kidnap women, by picking them out through their social media accounts, and they force them to become part of this 'family' by holding them hostage. I thought that was stupid, because it's not like it could have made for a truly great twist, but the reveal that this family, more specifically this teen boy (who looks like he's 30), have been spying on Jessie for this entire time and have specifically chosen her to be this kid's 'wife' would have been cool. But the fact that we already know that the family does this right from the start robs us from what could have been the 'best' part of the film. We should find out at the same time that Jessie finds out. I suppose the reason behind this is to explain what happened to the teen boy when you see that he literally has no jaw. But you could have also done that through a flashback, there's absolutely no need to make this the first scene in the entire movie It is what it is, but I wasn't a big fan of the movie revealing its cards right from the start. Another thing I wasn't a big fan of was the fact that, quite frankly, this movie was really kind of boring. Really, this is the bigger issue with the movie. It's just not particularly exciting or even all that interesting. I think it sort of uses the reverse home invasion thing to try to make things a little more exciting. But it really doesn't work. I just wasn't into the characters, who are all really kind of unlikable (particularly Miles), I wasn't into the story and the horror elements are really all kind of dull and predictable. Don't Breathe was, pardon the pun, a breath of fresh air for the genre. Like I said, it was intense and twisty. Not to mention the darker story going on with the blind man, that you gradually found out as the film progressed. They didn't just tell you everything at the start, like this one. I suppose saying that it's boring is better than me saying that it was an awful movie. But, and this is something I've said a lot, a boring movie is more difficult to get through that it is to get through a horrifyingly bad one. Writing reviews for horrible movies is also therapeutic, whereas writing reviews for boring movies can be a chore. Though, if I am to be honest, while I was bored by this, it was a better boring movie than the ones I'm usually talking about. The acting, while I found the characters annoying, was perfectly fine. There's nothing wrong with that. And, again, there's nothing really all that wrong with the movie itself, it's just another home invasion thriller that fails to transcend the tropes associated with the genre. It's ok at best, but nothing more than that. I can't exactly recommend this.