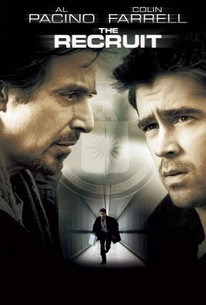 Critics Consensus: This polished thriller is engaging until it takes one twist too many into the predictable.

Critics Consensus: This polished thriller is engaging until it takes one twist too many into the predictable.

Critic Consensus: This polished thriller is engaging until it takes one twist too many into the predictable.

A brilliant young man is tapped to join the elite branch of American intelligence, only to discover how complex and dangerous the job can really be in this suspense-drama. James Clayton (Colin Farrell) recently completed his studies at MIT, where he graduated at the top of his class and is pondering his next move while he works as a bartender at an upscale nightspot. One evening, Clayton is approached by Walter Burke (Al Pacino), a recruiter for the Central Intelligence Agency, who describes himself as "a scary judge of talent" and believes Clayton is just the sort of man the CIA is looking for. Clayton, who has little interest in an ordinary nine-to-five career and suspects his father (whom Burke claims to have known) worked for the Agency, accepts the offer and is soon sent to the CIA's secret training camp. It soon becomes obvious that Burke's intuition has not failed him; Clayton is smart, fast on his feet, a crack shot, and possesses a very agile mind. In training, Clayton notices a few things, most notably one of his fellow students, Layla (Bridget Moynahan), a beautiful woman whose skills equal his own. Clayton becomes quite infatuated with Layla, and after a fashion the attraction appears to be mutual, but Clayton has to keep in mind Burke's dictum that "nothing is as it seems," especially when Clayton is given a special assignment -- find the mole within the Agency's training program who is actually feeding information to America's enemies.

Dom Fiore
as Instructor No. 1

Jeanie Calleja
as Co-Ed No. 1

Steve Lucescu
as Instructor No. 2

Sheldon Davis
as Security Officer No. 1

Oscar Hsu
as Psychiatrist No. 1

Arlene Mazerolle
as Psychiatrist No. 2

Brian Rhodes
as Psychiatrist No. 3

Neil Crone
as Farm Instructor No. 3

Ray Paisley
as Farm Instructor No. 4

Scott McCord
as Young Instructor No. 2

Shaun Verreault
as Band Member No. 1

Safwan Javed
as Band Member No. 2

Earl Pereira
as Band Member No. 3

News & Interviews for The Recruit

View All The Recruit News

Critic Reviews for The Recruit

I rather enjoyed The Recruit and I'm guessing you will, too. The script is well-paced and witty, Pacino is as watchable as ever.

Above-average thriller, but not very memorable.

A standard-issue spy game with all the layered complexity of Ludo.

The pleasure of watching two alpha males -- Al Pacino and Colin Farrell -- circling each other mano a mano substantially beefs up this otherwise routine spy thriller.

Watchable only for its star power and scarce caffeine kicks...awfully predictable. [Blu-Ray]

Many would believe Pacino could do no wrong but he has. The Recruit serves only to ignite a pilot light in the imagination of espionage lovers everywhere.

The film still makes a diverting entertainment in spite of its obviousness.

Pacino's puppet-stringing of his recruit is reminiscent of Peter O'Toole's manipulative character in 1980's 'The Stunt Man.'

Audience Reviews for The Recruit

The Recruit is a film that showcases an interesting idea, but simply doesn't quite get there. It's a great shame because this film could have been something great, unfortunately it falls flat after 45 minutes in, and the plot seems to stop dead in its tracks. The recruit could have been a good film, but instead it just becomes a mediocre film that ends up being a waste of time. You'd think that a film with a strong lead in Al Pacino would be good, right? Well, this one disappoints and by the end of the film you feel that something is missing to really make this film a must see film. Unfortunately , this film is not interesting, and the plot goes nowhere after 45 minutes. The acting was decent, but overall everything seems out of place after a while. The Recruit is a pointless action film that just doesn't deliver. I thought the film could have been much better than this, and it was a total waste. The Recruit had a good idea for a plot, unfortunately the second act of the film just doesn't deliver, and that's what makes this film mediocre. The Recruit is one of those films that had a good idea, but due to a poor script, simply doesn't cut it, and ends up being a flawed film. If you're looking for a good action spy thriller, then don't watch this film. This film is quite disappointing and ends up being a dud by the time the credits role.

'The Recruit' is a nasty little thriller whose twists and turns keep you guessing until the end, even if its obvious who the real antagonist is. The plot is a bit contrived and the performances aren't spectacular, but the movie delivers cool, swift entertainment. It's not incredibly well-made, but much more enjoyable if you sit back and let the plot unfold before you.

Okay performances in a rote exercise of predictability.

Same old CIA crap. I was expecting a thriller, if not a suspense, but this was outright predictable (lacks even a single unexpected twist) with a rotten presentation. Al Pacino's star power didn't make it any better. He was mediocre (as was the movie).