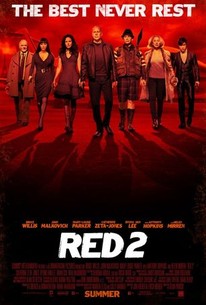 Critics Consensus: While it's still hard to argue with its impeccable cast or the fun they often seem to be having, Red 2 replaces much of the goofy fun of its predecessor with empty, over-the-top bombast.

Critics Consensus: While it's still hard to argue with its impeccable cast or the fun they often seem to be having, Red 2 replaces much of the goofy fun of its predecessor with empty, over-the-top bombast.

Critic Consensus: While it's still hard to argue with its impeccable cast or the fun they often seem to be having, Red 2 replaces much of the goofy fun of its predecessor with empty, over-the-top bombast.

In RED 2, the high-octane action-comedy sequel to the worldwide sleeper hit, retired black-ops CIA agent Frank Moses reunites his unlikely team of elite operatives for a global quest to track down a missing portable nuclear device. To succeed, they'll need to survive an army of relentless assassins, ruthless terrorists and power-crazed government officials, all eager to get their hands on the next-generation weapon. The mission takes Frank and his motley crew to Paris, London and Moscow. Outgunned and outmanned, they have only their cunning wits, their old-school skills, and each other to rely on as they try to save the world-and stay alive in the process. (c) Summit

David Thewlis
as The Frog

Yo Santhaveesuk
as Security Officer #2

While we applaud the minds behind Red 2 for making a film for adults in a sea of movies for kids and teenage boys, they didn't actually make a good film for adults.

The trick to RED 2's success is its willingness to allow the actors to roar through all their greatest hits at the loudest possible volume.

Like the first one, it's played for laughs in-between bouts of mayhem; most of the gags are off-target, though Mirren's Nancy Mitfordesque assassin gets a pretty good kill ratio.

"Retired & Extremely Dangerous" this lot may well be, but after two films proving they can't get it together, the emphasis really ought to be on retired.

Instead of the bombastic blast RED provided, the new movie is uninspired product that uses a semi-familiar title to attract an audience.

Check your brain at the door, kick back and enjoy.

Incessant location changes and elaborate fight sequences may entertain in the moment, but an absence of reason marks a quick flight from memory.

What felt fresh the first time around now feels predictable.

Overall we're talking fun, firefights, and an enjoyable, but forgettable time at the movies.

Watching talented folks like this have a genuinely good time is contagious, and given the late-summer tsunami of mediocrity we're swimming in, simply having reason to smile a bit feels like a decent victory.

This was a very enjoyable film. The story continues with the retired - and more dangerous than anybody else - agents. Frank and his comrades find themselves treading all over the globe and finding conflict at each stop. If you haven't seen the first film, you can still enjoy this piece. You won't understand all of the relationships immediately, but the story stands on its own. And it does a very good job at that. The movie was so much fun. It had clever and well-thought out jokes throughout the film. The jokes kept coming and were very skillfully timed. The action was thrilling. Along with the jokes, non-stop action to get your blood pumping filled this film. They kept the same feel of cool, unreasonable stunts and explosions from the first movie, but they also added a lot more hand-to-hand combat, which was still very amusing to watch and excellently choreographed. The acting was great and the story was well-written with actual twists. The soundtrack and sound effects made all the guns and explosions that much more convincing and enjoyable. This film had a much higher body count than the last one, but still managed to keep it pretty light-hearted. If you liked the first one, this film will not disappoint. If you haven't seen the first one it's still very entertaining to watch. 4 Stars 3-23-14

Since its ridiculous nominee as 'Best Musical or Comedy Movie of the Year' in the Golden Globes, I think 'Red 2' has quite improving by attracted such another great cast such as Anthony Hopkins, Catherine Zeta-Jones, and a lovely performance from Lee Byung-hun.. But still, the important thing from this movie is not only Helen Mirren can shoot but so do Mary-Louise Parker! Well, I just hope they still considering making this franchise into a trilogy since I expecting another surprise, well I'm just joking..

Dean Parisot gives Red 2, like its counterpart, a solid mixture of comedy and action.

At first, 110 minutes sounds like a marathon for a movie of this caliber; however, the pacing is quick and to the point. The film moves from place to place, city to city, in a matter of minutes, leaving things fresh and new with every scene. At the same time though, it is easy to get lost in the shuffle without enough attention.

The action is in abundance, highly stylized, and even over the top. In other words, it fits right in with the style of this picture.

Bruce Willis is what he is in this film and there are no complaints here. John Malkovich is humorous and Helen Mirren is badass. Mary-Louise Parker continues to hold attention with her beauty.

Red 2 succeeds in all departments, making it a recommendable action-comedy sequel.