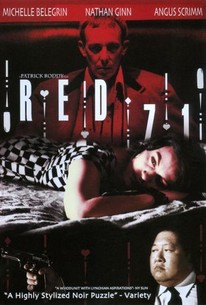 A part-time gumshoe begins examining a full-time murder spree in this film noir-influenced independent thriller. Charley (Ted Parks) runs a slightly seedy nightspot called the Red 71 Club, where his sexy wife Lorain (Michelle Belegrin) greets the customers each evening. Lorain is trying to convince rotund amateur detective Shane (Nathan Ginn) to buy into the club, and she's persuasive enough that Shane is more than willing to fork over the dough. But when Charley is found murdered, Shane begins to wonder if foul play is afoot, and he decides to look into the killing. Shane learns that Lorain had been cheating on Charley with Del (Justin Kreinbrink), but Del's status as prime suspect is short lived when he's killed too, and Shane discovers plenty of people in town had their reasons for wanting Charley and Del out of the picture. Red 71 features an original score from the acclaimed alternative pop group Friends of Dean Martinez.

Lays out the pieces of a highly stylized noir puzzle with maddening deliberation and total lack of humor.

There are no featured reviews for Red 71 at this time.