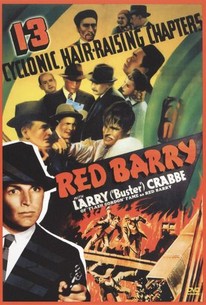 Based on Will Gould's popular comic strip, the 13-episode Universal serial Red Barry stars Buster Crabbe in the title role. Detective Barry is galvanized into action when $2,000,000 worth of bonds is stolen from an unnamed Asian country. Among the villains involved are prima ballerina Natacha (Edna Sedgewick) and criminal mastermind Quong Lee (Frank Lackteen). Forming an uneasy alliance with criminologist Vane (Hugh Huntley), Barry pursues the miscreants up hill and down alley. Also on Barry's side is intrepid girl reporter Mississippi (Frances Robinson), who makes Lois Lane seem shy and retiring. Seldom pausing for breath, Red Barry remains one of the most memorable of the Universal chapter plays.

If you are nostalgia driven by the old-fashioned b/w serials that once played regularly in the neighborhood movie houses, you should like this better than average one."

There are no featured reviews for Red Barry at this time.