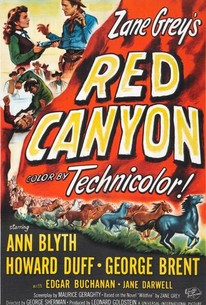 Red Canyon was one of several medium-budget, Technicolor westerns turned out by Universal-International between 1949 and 1959. Howard Duff plays wandering cowpoke Lin Sloane, who spends most of the film trying to capture a fabled wild stallion. While thus occupied, he finds time to romance Lucy Bostel (Ann Blyth), daughter of the region's most influential horsebreeder (George Brent). Conflicts arise when Lucy intends to race the captured stallion, much to the dismay of her father; there's also a major brouhaha involving Sloane's disreputable family heritage. Red Canyon was adapted by Maurice Geraghty from a rugged novel by Zane Grey. ~ Hal Erickson, Rovi

You have the ingredients for a bang-up prairie drama.

There are no featured reviews for Red Canyon at this time.