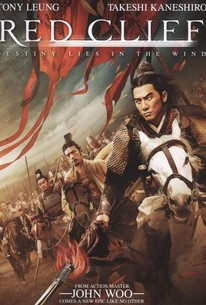 Critics Consensus: Featuring some impressively grand battlefield action, John Woo returns to Asia and returns to form in the process for this lavish and slick historical epic.

Critics Consensus: Featuring some impressively grand battlefield action, John Woo returns to Asia and returns to form in the process for this lavish and slick historical epic.

Critic Consensus: Featuring some impressively grand battlefield action, John Woo returns to Asia and returns to form in the process for this lavish and slick historical epic.

The first chapter of a two-part story centered on a battle fought in China's Three Kingdoms period (220-280 A.D.).

Yong You
as Liu Bei

He Yin
as Lady Mi

You may have the biggest flat-screen DLP monitor in the city, but Red Cliff will never look half as spectacular as it will on the big -- and I mean really big -- screen.

The result is an awfully big and powerful movie, even in abbreviated form.

A formidable prelude to an epic battle with resplendent effects and action spectacles.

Woo has re-embraced his Chinese roots with brutal commitment.

Tony Leung is powerful and involving as a sort of peaceful, poetic warrior who largely serves as the film's heroic figure.

The star, Tony Leung, isn't even handsome, but he's got this wonderful, intelligent, melancholy expression that's worth more than all the handsome there is.

... its structure and satisfactions are more conventional, but the overall conception is as remarkable.

Thank god that Woo left Hollywood. This is the masterpiece he was destined to make.

The art of war done John Woo style, Red Cliff is an entertaining and grandiose return to form by the master of action cinema.

... a magnificent military epic with the scale of Lord of the Rings and the grand visual majesty of the recent wave of Chinese historical epics...

Red Cliff is an epic retelling of the battle of Red Cliffs in which a power hungry politician attempts to invade the peaceful lands of the south to unite the kingdom under his personal rule. Although clearly a historical epic, the film I was reminded of the most whilst watching Red Cliff was The Two Towers, mainly because of the fact that it is pretty much just one huge battle sequence in which two vast armies of pixels kick the crap out of each other. It's basically the story of a game of military chess between two strategists rather than anything as mystical and romantic as Crouching Tiger or House Of Flying Daggers, and as such it is much more of a "boy's film". Woo does in fact try to inject some of this sweeping romanticism, but it falls short of Ang Lee's poetic vision because it relies entirely on one character; unfortunately she is criminally underwritten and Wei Zhao plays her with a constant vacant semi-smile that just made her look a bit retarded! On the other hand Takeshi Kaneshiro clearly relishes the role of wily tactician which makes a change from his usual action man persona and the best sequences come when the personalities of the characters are stamped onto the surrounding battle; namely the involvement of their feisty spy and Kaneshiro's ploy to steal arrows from the opposing army. The opening sequence featuring a general protecting his master's baby (a clear reference to Hard Boiled) also raises a smile. Maybe not fully rounded, but as a visual spectacle it is an absolute feast and it makes me wonder how good it would've been if Woo had stayed in China to create projects like this instead of spending the last 20 years sucking Satan's cock in Hollywood...

A decent big battle epic film by John Woo. The fight scenes are good and on a huge scale. Sadly there wasn't a great deal of plot, just waiting for the next big battle to take place, so it did become repetitive in that sense which isn't helped by a long run time.

John Woo's epic movie about the historical Chinese battle at the red cliffs has everything you expect from a film of such a scale: interesting characters that grow on you, a great soundtrack, huge spectacle and gorgeous shots, lots of (surprisingly unbloody ) fights and battles, some of which are of course as exaggerated and silly as expected from Asian cinema. Even the shorter cut of the film feels a bit long in the middle part. But the final battle and all the tactics that come with it are really great and offer very enthralling entertainment. It all culminates in an almost Tarantino-esque standoff between the main characters that literally has you on the edge of your seat. Thankfully, while some of his trademarks can be found throughout the film, Woo does not go overboard with his slow-motions or dramatically flying doves. Of course he still had to add a dove, though. Still, great and huge historical cinema.

*Note* I watched the U.S. theatrical version, which runs 158 minutes, and is a combination of varying amounts of parts 1 and 2 of the original Chinese version. John Woo, after a string of less than stellar Hollywood films, decided to return to China, and, armed with one of his largest budgets ever, came out with this sweeping historical epic based on an epic battle that occurered during China's Three Kingdoms period, during the end of the Han Dynasty (208-209) CE (aka AD). Being into history, yet not very familair with this particular event or section of history, I wasn't able to go into all out historian mode, instead having to spend a lot of time just sitting back and enjoying myself. And enjoy myself I did. This is a lavish, epic historical drama/war film. The action setpieces are well done, and cgi is used as a tool and not a crutch. The music and cinematography are wonderful, and there's some top notch set and costume designs. My real issues here is with the story. I don't know why they felt the need to condense a two part film into a single volume that is the length of either individual part. Doing this makes for some jarring editing, confusing story transitions at times, and some jumbled chronology and character development. I would have been happy watching two separate and unjumbled parts, just like I did with Che and Mesrine. This doesn't ruin things, but it does take away some of the impact, and it might not make things easier on audiences who aren't aware of the actual events and that sort of thing. I could follow things, yes, but still, they could have done a better job assembling this cut. At least the film isn't really dull, so that's good. Since this is Woo, I don't need to get into too much detail about the action and violence. It's well done, awesome, and delivers the goods. Despite how this version handles it, the story is good and intriguing too. Seems very Shakespearean. The performances are good, and honestly, it was a little hard for me to decide which side to root for. Maybe that didn't matter so much since this isn't a depiction of events that really had any bearing on my own life, country, and history. Still though, it's good to have a side to root for once in a while. All in all, a really decent film. I'd give it a far higher rating had I gotten to see the two individual parts, as opposed to this Frankensteined version, but I still think this is a solid enough effort to merit a Strong B to light B+.