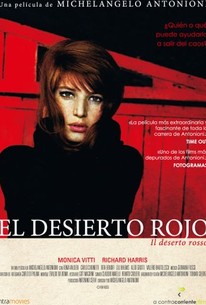 Red Desert (Il Deserto Rosso) once more combines the considerable talents of director Michelangelo Antonioni and star Monica Vitti. Cast as Giuliana, an unhappy wife, Vitti suffers from an unnamed form of depression and malaise. Her quicksilver emotional shifts disturb everyone around her, but they, like she, pretend that nothing is truly wrong. British engineer Corrado Zeller (Richard Harris) seems to understand what Giuliana is really after in life, and he acts upon it by entering into an affair with the troubled woman. Giuliana eventually comes to terms with her physical and mental pain, but this hardly means that she's "cured" in the conventional sense. Monica Vitti's sense of isolation is heightened by Antonioni's (and cinematographer Carlo DiPalma's) choice of colors, and especially by Carlo Savina's bizarre electronic musical score. This is a landmark movie in Antonioni's effort to portray alienated individuals in contemporary life; he places people against towering forms of technology to emphasize their smallness and lostness in the modern world of technological change. ~ Hal Erickson, Rovi

Michelangelo Antonioni's first film in color, from 1964, is his most mysterious and awe-inspiring work.

Antonioni's sense of design and how the environment inevitably influences his characters is masterly.

What a mysterious film it is, with much to perplex and even exasperate, but much to fascinate as well.

Red Desert is Antonioni's clearest, most striking statement of purpose - and one of cinema's great films.

A stunningly beautiful and evocative use of colour and setting.

For a film so controlled, you feel the blood surging just beneath the surface.

For the images, color, and the sound alone, Michelangelo Antonioni's The Red Desert is worth it.

Antonioni's first color film is the most beautiful and the most static he has made.

This flawed masterpiece is a political film, anger seething beneath the seductively beautiful surface, and a contrast to the surrounding devastation is provided by a simple fable told to a small boy by his mother.

It seems fitting that every frame should be rich with sorrow.

Antonioni impresses us with his stunning use of color (as well as his mise-en-scène, and in his first film in color, no less) to create meaning and visually emphasize what he wants to say in this intelligent and absurdly sharp study about depression and existential emptiness.

Being Antonioni's first color film, one cannot help be stirred by his masterful use of it. By muting colors with filters-and of course with a little help from paint-he introduces us to an industrial Italy. One void of all the romanticism associated with places like Venice. A place replete with drab grays & brown, where even fruit on roadside stands have lost their hue. It is a world changing. One in which our protagonist Giuliani, played by Monica Vitti, cannot readily accept. The way in which Antonioni captures these new machines, with a sense of eerie wonder, makes it easy to understand why Giuliana would be so unsettled by this new existence. Even Antonioni seems to easily get sidetracked by the awesome power of these monstrous machines & man's relative insignificance when standing next to them. In some ways, I would venture to call it an "industrial horror film." While my use of the term "horror" may raise a brow or two, for Giuliana, this new world is a genuine source of terror. The mechanical screams constantly pierce the air, causing Giuliana much distress. Antonioni frames scenes in which it appears that giant cargo ships are sailing right toward Giuliana, threatening to take her out in the march toward progress. In fact, Giuliana doesn't even feel at ease inside her own home. Haunted by her son's constant contact with these new technologies & other abject horrors not seen by the audience, Giuliana seems to rarely be in a state not consumed with fear. Antonioni exacerbates this fear with his camera, giving her very little room to breathe and in some instances, even backing her into corners. All of this tension is heightened by a superb electronic score which is at times as equally unsettling for the viewer. Overall, a provocative visual exercise & an interesting look at industrial Italy.

Absolutely stunning! Environmental composition, landscape, and color have never been used so effectively to convey state of mind. The industrial climate is an apt counterpoint to Vitti's neuroticism and lack of adaptibility. A daring and innovative cinematic achievement!!

Well, no one can accuse this film of having too much plot. But the lead actors are charismatic, and the landscapes are striking. Really, it's more of a situation than a story. The setting is a drab, seaside industrial factory. The sky is overcast and foggy. The water is choked with pollution. Monica Vitti plays the plant manager's wife, who is fresh from a suicide attempt. The implication is that her alienation and anxieties are a product of our modern, industrialized society. She dotes on her young son, but even he adds to her worries by faking polio for attention. She meets Richard Harris (awkwardly dubbed in Italian), an engineer passing through on business. Maybe he can provide her with some solace. Maybe not. The film's central message arrives when Harris ruefully notes that the world prioritizes humanity below progress, but above justice. Hmm. This was director Michelangelo Antonioni's first work in color, and the frame is dominated by muddy reds, grays, beiges and browns. There is no "desert" -- only a sense of desolation. Meanwhile, the sparse, electronic soundtrack is highly unusual, and vital to the film's chilly atmosphere. Metallic whirrs and drones subtly comment on Giuliana's malaise. No violins this time. The most entertaining scene is clearly a sequence inside a tiny, deteriorating shack where an unlikely orgy threatens to occur. But instead, the action de-evolves into Harris and others nihilistically tearing wooden planks from the walls to feed the stove. Another notable diversion is a fantasy segment in which Giuliana tells her son an escapist tale about a girl living in happy isolation on some mythic, sunny island. Antonioni has said "Red Desert" is not intended to be entirely pessimistic and, indeed, a flicker of hope finally comes when Giuliana observes that the birds overhead have learned to simply *avoid* the factory's plumes of yellow, toxic smoke. Adaptation seems to be the answer. Some will find this film evocative, but others will have little to do but marvel at Vitti's exquisite hair.