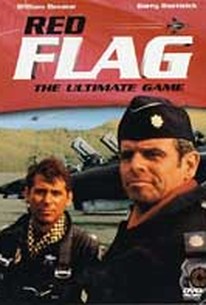 Purportedly based on a true story, this made-for-TV drama was filmed on location at Nellis Air Force Base in Nevada. The focus is on two highly competitive jet pilots, Major Jay Rivers (Barry Bostwick) and Major Phil Clark (William Devane). Unable to leave their rivalry on the ground, Rivers and Clark attempt to "work out" their differences thousands of feet in the air during "Operation Red Flag", a war-games exercise simulating actual combat conditions. As the tension mounts above the clouds, the story periodically cuts away to the two combatants' earthbound--and long-suffering--spouses (Joan Van Ark, Eve McVeigh. Former test pilot Chuck Yeager functioned as technical advisor on Red Flag: The Ultimate Game, which made its CBS network bow on October 3, 1981. ~ Hal Erickson, Rovi

Scott A. Embury
as Airman

Lewis B. Ford
as 2nd Pilot

There are no critic reviews yet for Red Flag - The Ultimate Game. Keep checking Rotten Tomatoes for updates!

There are no featured reviews for Red Flag - The Ultimate Game at this time.