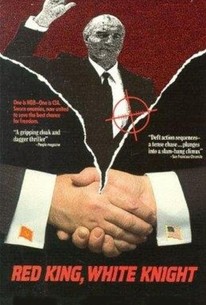 Tom Skerritt plays an end-of-tether CIA agent in Red King, White Knight. His superiors persuade Skerritt to take one last assignment: to prevent the assassination of the Russian president. Max Von Sydow plays Skerritt's opposite number at the KGB, who despite orders to kill the American agent, teams up with him to save the Soviet leader. Meanwhile, Skerritt's private life is complicated by the return of ex-lover Helen Mirren. Though unrated, the film contains violence and nudity. Produced for the HBO Cable Service, Red King, White Knight was first telecast November 25, 1989.

Gay Baynes
as Ecologist
View All

There are no critic reviews yet for Red King, White Knight. Keep checking Rotten Tomatoes for updates!

There are no featured reviews for Red King, White Knight at this time.