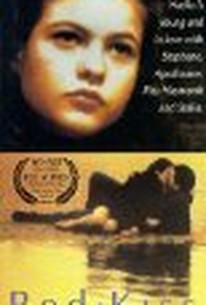 Red Kiss is set in the politically supercharged Paris of 1952. 15-year-old French girl Charlotte Valandrey, the daughter of radicals, is severely beaten by the constabulary while attending a communist rally. Photojournalist Lambert Wilson pauses long enough to take a picture of the bloodied Valandrey. Fascinated by Wilson's aloofness, Valandrey attaches herself to him. She is momentarily disappointed because Wilson is not the communist that he appeared to be at first, but love is stronger than ideology this time out, and the twosome end up in bed. Valandrey's commitment to the Red cause diminishes as her love for Wilson increases. She is forced to quit her local communist cell, but this is more due to jealousy than politics (her cohorts had wanted to get her in the sack themselves). Further disillusionment with the Cause comes about when Valandrey discovers that she is actually the daughter of Laurent Terzieff, a former party member who has renounced communism. Confused, Valandrey runs off with Wilson, whereupon her commie foster father, behaving like a garden-variety capitalist, brings charges against Wilson for compromising Valandrey's morals. The anti-communist subtext of Red Kiss is not the sole raison d'etre for the film; rather, it is used as backdrop for the heroine's emotional coming-of-age, as well as her struggle to establish her own values, rather than those of her family and friends. ~ Hal Erickson, Rovi

About as much fun as being billy-clubbed by riot police at a demonstration.

There are no featured reviews for Rouge baiser (Red Kiss) at this time.