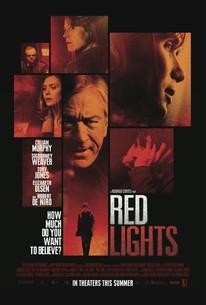 Critics Consensus: Wasting the talents of an impressive cast on a predictable mystery, Red Lights lacks the clairvoyance to know what audiences want.

Critics Consensus: Wasting the talents of an impressive cast on a predictable mystery, Red Lights lacks the clairvoyance to know what audiences want.

Critic Consensus: Wasting the talents of an impressive cast on a predictable mystery, Red Lights lacks the clairvoyance to know what audiences want.

Veteran paranormal researchers Dr. Margaret Matheson (Sigourney Weaver) and Tom Buckley (Cillian Murphy) debunk fraudulent claims of ghost whispering, faith healing and other psychic phenomena by detecting what Matheson calls "red lights," the subtle tricks behind every staged supernatural occurrence. But when the legendary blind psychic Simon Silver (Robert De Niro)comes out of retirement after 30 years, his once-fearless adversary Matheson warns Buckley to back off, fearing reprisal from the powerful Silver. Determined to discredit Silver, Buckley and his star student (Elizabeth Olsen) use every tool at their disposal to uncover the truth behind the charismatic, spoon-bending, mind reader. But Buckley is forced to reexamine his own core beliefs as his quest builds to a mind-blowing conclusion in this taut psychological thriller from award-winning writer and director Rodrigo Cortés. -- (C) Official Site

Ignacio Carreño López
as Man in the Bathroom

Paulette Sinclair
as Woman in a Wheelchair

Howard Swinson
as Old Man on the Bench

Larissa Bouvier
as Teenager on the Bench

Richard Felix
as Man in Bathroom #1

Joshua Zamrycki
as Man in Bathroom #2

The fact that Red Lights' action doesn't operate in a recognizable universe, however, is a constant problem.

The film doesn't offer the sense of release, or of surprise, that it seems to take for granted.

"The X-Files" is long gone. Hail and farewell. But its spirit lives on in "Red Lights." Hail, hail.

By strict definition, any movie featuring Robert De Niro as a spoon-bending clairvoyant superstar ought to hold a few cards up its sleeve.

It's nonsense on a plot level but played seriously without nearly enough personality or edge. Even the film's undeniably talented cast can't save it.

In all, there are some entertaining moments, some well-directed suspense sequences, and some interesting questions about perception. But when it comes to the details of the story - I'm not falling for it.

This is a muggy, lifeless film that should have been better than what it turned out to be.

This brave undertaking is surely not aimed at the masses, and may be destined to be a cult title in an otherwise worn thin genre.

Red Lights remains interesting throughout, but by the end it's appealing in the same way a train wreck is.

The climax is also a touch too weighty -- a little explanation is crucial, but it goes on just a little too long. Still, Red Lights is mostly a fun example of its genre, with both jump scares and narrative surprises.

A pair of paranormal investigators who specialise in debunking self-proclaimed "clairvoyants" go head to head with a renowned psychic who comes out of retirement. Rodrigo Cortes' supernaturally themed thriller has many of the hallmarks of the projects of the likes of M. Night Shyamalan in that it's nicely shot, directed with some panache and has managed to attract some big names to the cast. Unfortunately it has also inherited their hokiness and reliance on telegraphed twists that are all to obvious to anyone with any cinematic literacy. Red Lights does have its moments thanks to the superior cast and the cinematography is attractive and atmospheric but as always seems to be the case with the genre, the initial intrigue is far more entertaining than the pay off. In the end it feels over-long and anticlimactic despite a potentially interesting final twist in the tale and more like a decent episode of The X-Files than a big budget movie. Christopher Nolan has made a career of doing this type of thing, but doing it much better.

Tom Buckley: And today it'll be over...for you and for me. "How Much Do You Want To Believe?" Red Lights is a very interesting movie, but not all that satisfying of one. For one, the first half is extremely dull and boring. The movie finds some momentum in the second half though. Also I don't care for where the story goes. It's all so obvious and unsatisfying, that it destroys an interesting concept and a trio of good performances from great actors.  Margaret Matheson and Tom Buckley work together at a university and for the most part, their work is in exposing psychics who claim they have powers for frauds. There's one psychic that made Margaret doubt though and that is Simon Silver. Silver is coming back from retirement and is the most famous psychic out there. Tom gets obsessed with exposing Silver as a fraud, but is he actually? Robert De Niro and Sigourney Weaver are both good in their veteran roles, but Cillian Murphy definitely gives the best performance in the film. Still these actors and a good storyline are ruined for me, by the movie going exactly where you expect, but don't hope, it goes. Unfortunately this one goes that path and ends up playing out in a Carrie-esque fashion.  This is still worth a look, as it isn't a completely horrible film, but just one that doesn't live up to what it could have been. This should have been a great movie and not just a so-so one and that's my biggest problem with it. If the idea of a movie about psychics and trying to expose them for frauds, with many bizarre elements thrown in for good measure, intrigues you; then give it a look.

Confusing. Had potential, but went astray...

A lot of talented actors in a silly, dark piece of crap.