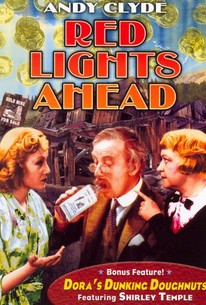 A family loses its collective head going from rags to riches in this low-budget comedy from also-ran studio Chesterfield. Former slapstick comedian Andy Clyde starred as Grandpa Tom Hopkins who, after selling his junk business, moves in with daughter Molly (Lucille Gleason), her husband Ed (Roger Imhof), and their children Mary (Ann Doran), Edna (Paula Stone), George (Ben Alexander, and Willie (Frank Coghlan Jr.). Ed, who is a member of the town lodge "the Whales," is persuaded by Whitney (Sam Flint) the "Grand Harpoon," to buy $5,000 worth of shares in a promising gold mine, mortgaging the family home to do so. Soon the family is rich and everyone except Molly takes on airs. The walls come tumbling down, however, when Whitney is revealed to be a fraud. Happily, Grandpa Tom is able to bail out the family and, having learned a valuable lesson, everyone goes back to their old, more frugal ways.

Jack Randall
as Nordingham
View All

Critic Reviews for Red Lights Ahead

There are no critic reviews yet for Red Lights Ahead. Keep checking Rotten Tomatoes for updates!

There are no featured reviews for Red Lights Ahead at this time.