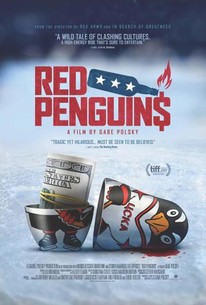 Detailing an incredible true story involving gangsters, strippers, and live bears serving beer on a hockey rink, Red Penguins tells the wild forgotten true story of capitalism and opportunism run amok in Moscow. Shortly after the collapse of the Soviet Union, the Pittsburgh Penguins and the famed Red Army hockey team formed a joint venture that redefined what was possible in the new Russia. Eccentric marketing whiz, Steve Warshaw, is sent to Moscow and tasked to transform the team into the greatest show in Russia, attracting some of the biggest names in Hollywood and advertising along the way. He takes the viewer on a bizarre journey highlighting a pivotal moment in U.S.-Russian relations during a lawless era when oligarchs made their fortunes and multiple murders went unsolved.

...thanks to this superb film from director Polsky, we now have the definitive record of one of the craziest chapters in the history of ice hockey.

Whether or not certain events played out precisely as we're told, the urgency of Polsky's cautionary message is inarguable.

If "Red Penguins" doesn't always strike a satisfying balance between the glib and the grim, the broader topic - the commercialization of hockey - affords it a novel lens on Russia's economic transition.

"Red Penguins" has the kind of stranger-than-fiction appeal that could lure both hockey fans and the puckless.

The resulting movie is both wildly entertaining, filled with boozy tales of backroom deals, and a perfect primer for those struggling to understand the Russia of today.

...shifts from a comedic, so-crazy-it-has-to-be-true setup into a story unnerving and intensely unsettling.

Michael Ward
Should I See It

If you're a hockey fan, particularly this era in the '90s, you might enjoy Red Penguins.

By leaving in awkward pauses and gaffes... the interview footage fully fleshes out characters that would have been relegated to talking heads in lesser hands.

Kyle Mullin
Under the Radar

The film is chock full of colorful, larger-than-life figures on both sides of the East-West divide, and it's fun to guess what actors would play which characters in a Hollywood movie version of the same story.

You couldn't write characters this vibrant, hilarious, sinister, or eccentric, and if you tried, people would accuse you of resorting to stereotypes.

There are no featured reviews for Red Penguins at this time.