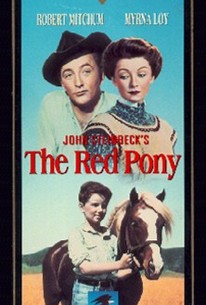 One of themost acclaimed films to emerge from Republic studios, The Red Pony is an adaptation of the John Steinbeck story of the same name. Top billing goes to Myrna Loy and Robert Mitchum, but the film's true star is young Peter Miles as Tom. A lonely farm boy, Tom seeks refuge from his troublesome home life and his eternally squabbling parents (Loy and Shepperd Strudwick) through his devotion to a newborn colt. The red pony is the issue of a prize mare owned by ranchhand Billy Buck (Mitchum), whom Tom idolizes. The film's coming-of-age theme cluminates in a poignant denouement. Louis Calhern plays Tom's lovably prevaricating grandfather, while 10-year-old Beau Bridges essays one of his first featured roles. Aaron Copland's score and the rich Technicolor photography of Tony Gaudio contribute to the film's overall mood. The Red Pony was remade for television in 1973.

Don Kay Reynolds
as Himself

William Quinlan
as Ben
View All

Critic Reviews for The Red Pony

There are no critic reviews yet for The Red Pony. Keep checking Rotten Tomatoes for updates!

Audience Reviews for The Red Pony

I don't like animal movies in the first place, but I also got weirded out by the strange relationship between Mitchum and that kid in the movie. This movie was just stupid.

A bit puerile and precious but okay family film with good work from Mitchum and Myrna Loy. Louis Calhern has a grand old time as the grandfather dispensing old west wisdom like Buffalo Bill.