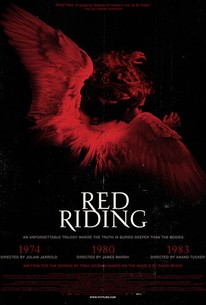 The Red Riding Trilogy continues in this sequel that picks up six years after the events of the first film. The Yorkshire Ripper is continuing to prey on the young women of a dead-end town, and the local police have proven completely ineffective in solving the crimes. When Manchester detective Peter Hunter (Paddy Considine) arrives in Yorkshire to investigate, he discovers a number of inconsistencies in the official report, and begins to suspect foul play. Unfortunately for both Detective Hunter and the growing list of victims, the local police seem unusually tight-lipped about the case. Perhaps their refusal to aid Detective Hunter in his investigation has something to do with his previous visit to Yorkshire in 1974, when he rubbed the local authorities the wrong way while investigating a shooting. As Detective Hunter delves deeper into the case, it becomes increasingly obvious that incompetence isn't likely to blame for the lack of progress made by Yorkshire police.

Joseph Mawle
as The Ripper

1980 isn't a placeholder by any means, but it suffers by its middle placement, lacking the newness of the first film or the cumulative satisfactions of the last.

Stands as a wrenching tale of power abused and lives discarded. It is powerful stuff.

It's a good film on its own and it's made great by its place between two others.

Has an interesting and compelling atmosphere, and a stronger sense of human relationships than its counterparts, but it's also much more cold and impenetrable.

A huge step up from the unfollowable plot and unfathomable evil of Red Riding: 1974.

Aside from the ongoing criminal mystery and obstruction of powerful men, it's a tale of dreary duty. [Blu-ray]

Unrolling at a frustratingly slow pace, it's the weak link in the series, but it's still an extraordinary -- and extraordinarily well-assembled -- series.

This second film, which paints the West Yorkshire police as first degree multiple murderers, has a strong subtext of woman and their children.

1980 benefits from calmer direction and a better class of actors, while gradually drawing out an additional serial killer tale that goes beyond journalistic investigation to pry open the black heart of the local law.

For the first half of the film, it feels like a mediocre movie that has not much to do with it's predecessor, but just there to continue the story and find the killer. We are thrown into an entirely new story with new characters and plot lines, but it is far less interesting than the first. The mentioning of past characters is really the only thing that kept me going until the second half when things start intertwining. The whole film makes you wonder what is going on, until the very last moments of the film where it all comes together and you see why it is a sequel/continuation. Andrew Garfield only makes a cameo in this film, but it has the most meaning out of anything else seen in the film. I thought the first film was great, so I found it very hard to put this film on the same level, but once the end of the film comes full circle, you see why you watched it, and it's worth it!

Part two of the "RED RIDING TRILOGY," 1980 is a far superior film to the already strong first chapter. Unlike it's predecessor, James Marsh's episode takes a stream-lined, focused approach towards it's narrative and the result is an infinitely more chilling and effective work. Playing like a classic detective noir, the film does a phenomenal job of bringing you in and smothering you with it's dark, dank atmosphere. Paddy Considine, the anchor of the film, is outstanding. You really feel for him and grow increasingly more nervous as he slowly gets in over his head. The film is a slow-burn, but one that never settles on being less than gripping. "1980" is a great film in its own right. If it didn't address details and clear up some of the plot of the first film, it would almost work as a complete standalone. It`s a movie so good, that it made me like the first part even more. Also, I've never been more sickened by law enforcement corruption than in this film. A bold statement, but one that is truthful and a testament to the film`s eerie, stomach-churning effectiveness.

Another brilliant British cast for the 2nd installment of the Red Riding trilogy, with my personal favourite of course, Paddy Considine. I do feel on this one, that the acting was far superior to the actual plot at times and whilst I was expecting more in depth investigation to the Yorkshire Ripper, what was delivered was the background of the investigation along with a personal sub plot to the investigators, still a great watch though.

The second in the Red Riding Trilogy, And this movie is as intense as the first one. Police Corruption has run wild and as a detective is getting closer his life becomes mre in danger. 5 Stars