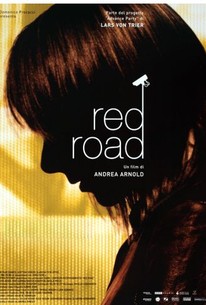 A woman paid to watch others begins stalking one of the men she's been trailing in this thriller from Scotland. Jackie (Kate Dickie) is a woman who has buried herself in her work with a security company since the death of her husband and child. Jackie's work involves monitoring a crime-ridden corner of North Glasgow with a bank of closed circuit television cameras; after her shift is over, she either goes home or has an occasional assignation with a friend from work who isn't happy with his wife. While watching the comings and goings in a run down apartment block, Jackie spies Clyde (Tony Curran), a handsome former jailbird who shares a shabby flat with his buddy Stevie (Martin Compston) and April (Natalie Press), Stevie's girlfriend. Jackie becomes fascinated with Clyde, and after carefully following his routines through her cameras she meets him face to face at a local bar, and soon lures him into a relationship. However, in time Clyde discovers neither love nor lust is the motivating factor behind Jackie's actions. The first feature film from award-winning director Andrea Arnold, Red Road received its world premier at the 2006 Cannes Film Festival. ~ Mark Deming, Rovi

John Comerford
as Man with Dog

Anne Kidd
as Brenda
View All

Unfortunately, its superb performances and assured camerawork are overwhelmed by dubious psychology and a clichéd climax.

Though it's paced as a thriller, the film ultimately emerges as a haunting exploration of how grief can weigh on us, and the depths to which it can drive us.

A must for movie lovers who want to see how so much drama, mystery and emotion can be created from so little.

It should be noted that Red Road contains one extremely graphic sex scene. But like much else that transpires in Red Road, what is seen is not always what it looks like on the surface.

For a voyeuristic medium, this tale of a voyeur does a poor job of prying into its own protagonist's life.

a long, dark and twisted journey..., scrutinising the shadier contours of human loss and guilt like a grainy face on a screen.

...an erratic yet mostly rewarding debut...

I firmly believe Andrea Arnold has directed Red Road in a responsible and appropriately complex fashion, but holy hell it sticks hard into the heart.

Despite some elemental flaws in logic and plausibility, this is a tense and potent film at times that hints at the sort of greatness that we can find to a greater degree in Ms. Arnold's other works, Wasp and Fish Tank.

No drab stone is left unturned

Three-fifths of a great film, this stylish, Glasgow-based, Danish-inspired stalker drama does not deliver on its promise.

A very good movie about a women seeking revenge for the death of her husband when she see's the man responsible for his death and her daughters death back on the streets. A thriller and drama with many twist and turns. 4 stars 7-3-12

There's something very appealing about withholding the full story from an audience until the end. If it's done right. With Red Road, it's not done very well. What the folks involved in this project wanted to do, I'm sure, is create suspense. Mission not accomplished. By the time you understand the whole story, you really don't care.

A tough, surprising movie that is nonetheless limned with "I've Loved You So Long Syndrome" - that is, the obfuscation of the plot to extend an ultimately thin story to feature length. What makes this tough narrative conceit work in Red Road is that Jackie is obviously such a broken, lonely woman that there's really no need to exhume her personal tragedies. She has no tangible support system to discuss her past with, short of some passively hostile and generally removed in-laws. Where Kristin Scott Thomas was surrounded by people who cared about her in I've Loved You So Long, and was completely unable to conjure up why she was imprisoned for them, the main character here has no real reason to share. This movie is also superbly controlled, vaguely peppered with disturbing themes like voyeurism and abuse, not as an immediate concern of the plot but merely to enhance our view of Jackie's situation. Her position as a City Guard watchperson, as I understand it, empowers her in a way that she probably never got to experience in her past, not to mention the escapist thrills it provides by looking into someone else's life. I don't know if they were intentional or not, but there are some really thoughtful questions that Jackie's choice of profession brings up; how reliable are a human's hands in a position like this? She seems to be good at her job, but utterly fallible when confronted with a reminder of her horrifying past, which reveals itself to have consequences. It really made me wonder about the moral and political ramifications of placing cameras all over a city under the guise of "protecting its citizens," which I do not have to contend with in America but am still curious as to the reactions of those who do. Whether this subtext is just me making things up or Andrea Arnold being exceptionally insightful in a quiet sort of way, it really speaks to Red Road's non-linearity and thematic freedom. Jackie, in herself, is so complex and unusual that she seems liable to do just about anything; the movie feels like it could go anywhere at any time. Kate Dickie's performance is commendable. She reminded me of a filtration of Tilda Swinton's Julia (two years her predecessor, anyway), more rigid morally but just as miserable and against-the-wall enough that her options are limitless. What more does she have to lose? Dickie is a wisp, sad and ephemeral, and her presence is like a hook in the viewer's gut. Her efforts in the movie's final scenes are shattering. This is not to discredit the fantastic work of her supporting cast, including Tony Curran as her scene partner in one of the most lucid, surprising scenes of "intimacy" I've seen. It is clear that Arnold, in participating in this experiment (Lars von Trier challenged three directors to make different movies with the same cast of characters and this is the first result), had a clear vision of what she wanted to do with her characters and how specifically to embody them. The actors she selected are perfect in what they project.

A great Glasgow set thriller with noir elements and nods to Hitchcock's Rear Window. It's also heavily influenced by the Dogme style of film-making - it breaks far too many of the rigid 'anti-cinematic' rules of that style of film-making to be called a true Dogme film. Thank God! It's far too cinematic for that! But, then again, maybe that is the whole point of the Dogme rulebook - so that film-makers can brake those rules! To challenge them even and make them less complacent and lazy? (take away the tools and imagination becomes a greater force). I hope so. Otherwise, why bother?? I knew very little about Red Road before I saw it. It's the best way to come to the majority of cinema but sometimes it's more important than others. Here we have a story that teases us continually. It constantly challenges our sympathies and attention - we never fully know the protagonists' back story till close to the end. We are given clues and hints of course, which get more obvious as we watch. But often, they feel more like red herrings. It's this ambiguity that enriches the tension - who is the villain here? Why is this woman so interested in this ex-con. What was his crime and her involvement. Is he a villain? Is she a victim? It's a very untypical thriller but a thriller it is. The tension is almost unbearable at times. Initially we assume he is the villain and she is maybe his potential victim. And she knows him. What did he do? It must have been something horrible and unspeakable. He looks like a pervert! He is carnal and almost animalistic. But is he? Maybe this is only how she sees him. Was she, in some way, complicit in a crime even? After all, people who should be close to her are not. They are, in fact, estranged from her and seem even hostile to her. The ambiguity is what creates a lot of the tension here. In a straight-forward suspense thriller we are told early on of the unspeakable horrors the villain has committed and the thought of him doing so again is where the tension comes from. Here, we don't have that luxury so the ambiguity of it's protagonists actions constantly challenge our empathy. We are never aware of what is going to happen next because we don't really know what they are thinking. We can only guess. It's a trick that was used in 'Lust, Caution' but here, it's more successful. The ending, also, is certainly not as ambiguous as Ang Lee's pic. The film's centre piece, where the protagonist's 'clash' (?) had me literally holding my breath - it's a bold and exciting sequence that is utterly draining (did Ang Lee see this film before he made Lust, Caution??). It's not until the end of the film that you realise the full mental torture at the heart of the matter. On the surface, Red Road is a story of revenge with large doses of voyeurism - just as our heroine exploits her job's privilege and becomes a voyeur, so do we, the audience (as Hitch was always telling us!) become peepers. As the emotional core of the two main protagonists is gradually and quite brutally laid bare before us, we become more unnerved and uncomfortable and wonder how much we really should be seeing? Such is the vulnerability exposed. Ultimately though, on a deeper level, it's a quite profound story of forgiveness and all-consuming guilt, atonement and redemption. Letting go.