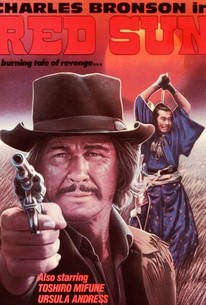 In what was billed as "The First East-Meets-West Western," Toshiro Mifune plays Kuroda, a samurai warrior who accompanies a Japanese diplomat to the United States. The diplomat has brought with him a golden, jewel-encrusted sword to present as a token of good will to the president, but as they travel by train through the west, they're ambushed by a pair of outlaws, Gauche (Alain Delon) and Link (Charles Bronson). Gauche and Link steal the sword, but Link leans the hard way about his partner's trustworthiness when Gauche double-crosses him and makes off with the booty. Since both Kuroda and Link have a grudge against Gauche, they warily join forces to track him down and return the sword to its rightful owner. Along the way, they have to deal with cultural conflict, Indian attacks, and encounters with beautiful women (played by Capucine and Ursula Andress). Given its cast and theme, Red Sun was predictably enough a major box-office success in Europe and Japan, but it passed through with little notice in the United States.

...a watchable (but consistently erratic) effort that generally feels like it should be much, much better.

A weird but plausible Western from one of the fathers of modern action cinema, with a stacked international cast.

The acting is about what we have come to expect from the international celebrities involved.

It's a fun western movie. The thing that made, Red Sun, don't be so good is the cliche of the tough guy, that is Charles Bronson. The story: original, screenplay: full of action, but commit some flaw. Terence Young's direction is weak, and Toshiro Mifune looks like the only thing that save Red Sun. Good film...

If theres one thing worse than dodging ruthless criminals, blood-thirsty Indians, and a crazy blonde hooker....its themselves! An unlikley pair must team-up in order to get the same thing....revenge and loot! A perfectly acted, bloody tale that'll leave you breathless. Just wonderful!

All-star, fitfully entertaining Western has an interesting premise - samurai vs. cowboys - but ultimately wastes the considerable talents of the great Japanese actor Toshiro Mifune. Charles Bronson has another of those offbeat-character parts that he underplays into a leading role.

A Great Movie, You will find this in some catalogs as a Spaghetti Western, I don't know it just didn't have that good ole Spaghetti Western Quality aka: B-Movie effect. After all some outstanding stars in this one. Charles Bronson, Toshiro Mifune (The Greatest Sword Fighter Ever), Alain Delon (Fabio Montale ) , And the ever so trampy Ursula Andress Now I am not sure why guys were so excited to see Ursula in any movie, nothing I have seen impresses me. But this movie is worth 4 stars, I really though it was filmed in the US, but come to find out its in Spain. Charles Bronson and Toshiro Mifune run around the country side trying to track down Alan Delon who stole the gold the sword and has Ursula, In the End only Charles Rides away but not in to the sunset, its a shame because I believe that Charles and Toshiro could have made many movies together. Its a good Western Add it to any collection, if you can find it. (Very Expensive). 4 Stars