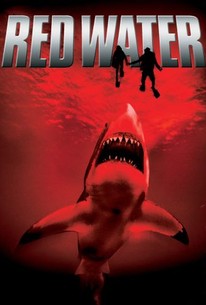 A treacherous Louisiana river is the setting where divorced couple Sanders (Lou Diamond Philips) and Kelly (Kristy Swanson) forget their differences long enough to search for a new source of energy. The couple is joined -- and later waylaid -- by a pair of crooks named Ice (Coolio) and Jerry (Jaimz Woolvett), who are convinced that a cache of stolen loot rests somewhere at the bottom of the river. Before long, everyone is in danger of being sliced and diced by a rogue freshwater shark. Another of the several million Jaws derivations glutting the cable TV airwaves, Red Water at the very least boasts excellent animatronic special effects -- not to mention a dead-body count that would shame a Rambo or Terminator. The film debuted August 17, 2003, on TBS.

This is less a shark than a chicken.

An over-written adventure film that features an on-the-loose man-eating shark that can survive in fresh water.

Getting to see Kristy Swanson, Lou Diamond Phillips and Coolio fight sharks will only carry a movie so far, and this plot...not so much.

This is a worst movie. The shark looked very fake. The production values were never given a second thought, and having Coolio pretty much play himself on a boat didn't add much to the whole thing.