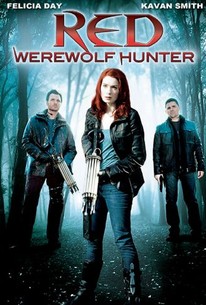 A broken truce leads to the threat of all out war between werewolves and humans unless a modern-day descendent of Little Red Riding Hood can kill the ravenous wolf leader before the battle begins. Virginia "Red" Sullivan (Felicia Day) and her fiancée are werewolf hunters. But when a lycanthrope attacks Red's fiancée, the full moon puts a damper on their future together. Meanwhile, power-hungry werewolf Gabriel (Stephen McHattie) violates an ancient accord between the hunters and the creatures, and Red sets out to slay him before a new breed of lycanthrope rises to power.

By no means a work of A class entertainment, but for what it promises it makes good on action and decent monster effects...

Perhaps the avid Felicia Day fan might want to watch just for the ability to say that they watched a movie with Felicia Day in it. Otherwise it's pretty hard to see any value in this (definitely made for TV) movie.