Redemption: A Mile from Hell2009 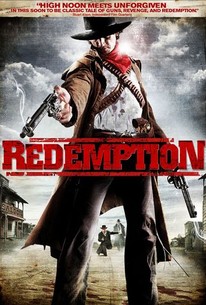 Redemption: A Mile from Hell Photos

Director Robert Conway crafts this genre busting western set in a lawless town where outlaws and marked-men go to elude justice and live out the rest of their days in peace. Somewhere along the Mexico border exists an old mining town called Redemption. Founded by Quakers in the mid-1800s, Redemption quickly gained a reputation as being the place to go if you're looking to escape the long arm of the law. Frank Hardin (Dustin James) is just such a man. A former cattle rustler who relied on dishonesty and a six-shooter in order to get by, Frank arrives in Redemption and witnesses a deed so abominable that it shakes him to his very core. Repulsed that he was advertently a part of the transgression and fearing for his immortal soul, the man who once cast the law aside attempts to summon deliverance by righting that terrible wrong before his number comes up.

Tom Noga
as The Apostle

Clint James
as Captain Till

Critic Reviews for Redemption: A Mile from Hell

There are no critic reviews yet for Redemption: A Mile from Hell. Keep checking Rotten Tomatoes for updates!

Audience Reviews for Redemption: A Mile from Hell

Shitty indie western. I'm not a big fan of westerns anyway but with a cheesey story and script there wasn't much chance of me becoming one here either. When an assassin feels guilty for taking out a young girls family years ago, he goes to the shithole town that she works as a prostitute in to find and save her but as usual, the towns people have other ideas and theres a bit of shooting and some boring dialogue as we try to care what happens to our hero and his girl. As soon as i saw the cover which looks more like a computer game cover than a film one i should have known.

Redemption: A Mile from Hell Quotes