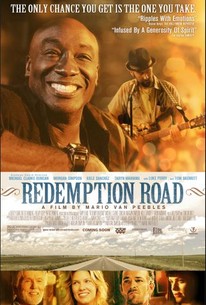 In Mario Van Peeble's new film Redemption Road, two seemingly different men (Michael Clarke Duncan, Morgan Simpson) embark on a music-steeped journey through the American South, learning along the way that life isn't about where you end up - it's how you get there that matters. Somewhere along the 900 miles between Austin, TX and Huntsville, AL the two men become unlikely friends. However, every road has an end. In Huntsville, sad truths come to light, with heartbreak and violence lingering in their wake, ultimately leaving both men changed forever. -- (C) Official Site

Jefferson has nowhere to go but up -- and eventually he gets there (note the title) -- but, boy, does the getting there take its sweet time.

a sterilized and predictable version of life that plays out like a very special movie of the week -- albeit one with a nice soundtrack.

Hope and healing wait at the end of a big-hearted musical road trip.

'Brother knew how to tell a story,' Michael Clarke Duncan says, admiringly, of Shakespeare. The same can't exactly be said of this earnest calling-card indie.

There isn't a moment in Redemption Road when you feel like walking out; nor do you take the finished film with you. It's a solid piece of work, recycled to a degree, but satisfying.

There are no featured audience reviews yet. Click the link below to see what others say about Redemption Road!