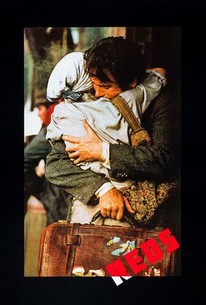 Critics Consensus: Brawny in both intellect and scope, Reds is an intimate epic that captures the tumult of revolutionary change and the passion of those navigating through it.

Critics Consensus: Brawny in both intellect and scope, Reds is an intimate epic that captures the tumult of revolutionary change and the passion of those navigating through it.

Critic Consensus: Brawny in both intellect and scope, Reds is an intimate epic that captures the tumult of revolutionary change and the passion of those navigating through it.

This epic film focuses on the life of famed American communist John Reed. The film begins in 1915, when Reed makes the acquaintance of married Portland journalist Louise Bryant. So persuasive is Reed's point of view that Louise kicks over the traces and joins Reed and his fellow radicals.

M. Emmet Walsh
as Speaker at the Liberal Club

Oleg Kerensky
as A. Kerensky/Himself/Witness

Will Durant
as Witness

Arthur Mayer
as Witness
View All

Beatty gives the performance of his lifetime as the erratic, possessed Reed, and his grasp of the direction of an epic film is truly astonishing.

If no one will learn much about politics from this film, Beatty has nonetheless put the fire of two burning lives in it. There is plenty in it about the risks that commitment entails, but it is about commitment.

It is occasionally rambling and repetitious, but nearly always intelligent and engrossing.

Reds is finally just an appealingly conventional epic movie-star romance with radical trimmings, but it contains several sharper elements that suggest the colorful period it seeks to recreate.

As for Beatty, Reds is his bravura turn.

all the richer and more meaningful because it is not static history, but rather a grenade of genuine political passion lobbed into an era of increasing conservatism and military build-up-an elegy for an ideal

A movie rich in purpose and incident.

The wait is excruciating, but the final convergence of the leads' periodically disparate paths is emotionally overwhelming - in a good way.

Given the impeccable production values, first-rate performances and epic proportions, the movie's just not as intriguing or involving as it should have been.

Here is a three and one-half hour docudrama that is claustrophobically filled with ceaseless political rhetoric and mixed with a limp, unpersuasive love story.

Beatty has come up with a rich, remarkably balanced portrait of a fascinating episode in American radical politics, and the love story that rode its crest like a tiny boat braving a turbulent sea.

A gripping political epic of ambitious discussions (and with a splendid production design) about an idealistic journalist/activist who became an ardent revolutionary to fight for what he believed in, and it is very well edited and well paced for a film that runs for over three hours.

This epic historical political romantic drama biopic proved to be a real labor of love for Warren Beatty, who served as co-writer, producer, director, and star. Well, in that first sentence, I gave this a heck of a descriptor, so, what's it all about? Well, it's a look at the life and career of John Reed- an American journalist and communist whose relationship with feminist and writer Louise Bryant played out during the Bolshevik Revolution of the 1910s. Reed chronicled said revolution in his book The 10 Days That Shook the World, and has the distinction of, so far, being the only American buried in the Kremlin. So yeah, what we get here is a lengthy, but fascinating look at Russian Communism, as well as an outsider's role in the midst of one of the most interesting parts of modern history. I'll admit that, while I'm not a real big fan of politics, I am somehow still mildly interested in and fascinated by socialism and communism. The film looks at the movement both in the U.S, and Russia, and gives it a human edge that was previously not done in prior representations of things. This film would be quite a major accomplishment if made today. That it was made during the middle of the Cold War is even more impressive. Besides having a straightforward narrative of Reed's life and career, the film contains talking head segments with various friends, acquaintances, scholars, and others who provide more insight into Reed, Bryant, the movement, and the era itself. Beatty knocks it out of the park in all of his various roles here, and, as a director, this has yet to be topped as his masterpiece. Joining him in the cast are a dynamite Diane Keaton as Bryant, Jack Nicholson as Eugene O'Neill, and the likes of Edward Herrmann, Paul Sorvino, Gene Hackman, Maureen Stapleton, and M.Emmet Walsh among others in various supporting roles of varying lengths. The acting is solid, the subject matter is quite interesting (I thought), the talking head segments were a wonderful addition, and the cinematography was quite strong as well. As for downsides: well, it is a really long film, and, while I was pretty glued to the screen for most of it, things did get a little slow and boring here and there, but not enough to wreck things. It's also not the fastest moving piece of work, either, and there's not really much in the way of action, but then again, this does cover a lot of material, so the pacing works for the most part, and there isn't too much of a need for lots of rousing action and whatnot. All in all, I was quite impressed by this. I can't say I'll be watching this one too often, but I did find myself quite impressed by this, and think it is a really important piece of work that you should consider giving a watch, especially if you get the time.

This was quite a long movie but the story being told got better and better.

Reds is an epic political drama, and Beatty's passionate directing and acting are fun to watch. The fact that Beatty was able to make this film in the 80s is equally admirable. But I find the movie too unquestionably devoted to revering the man and his politics. Sure, the film allows a few questions about his character in relationship to his treatment of Louise, but mostly I see Beatty jerking off to the life of Jack Reed, and such devotion always makes me suspicious. The film is so agenda-driven that it makes me understand why some dislike Oliver Stone.