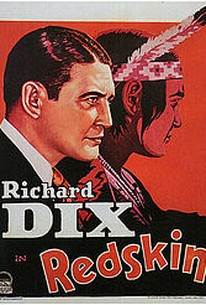 Intended as a follow-up (and improvement upon) the 1926 epic western The Vanishing American, Redskin was partially filmed in two-color Technicolor -- and, during its first big-city road show engagements, was shown in Magnascope, an early wide-screen process. Written by Elizabeth Pickett, an expert on the Pueblo Indian tribe of New Mexico, the film is in part an indictment of the government's ham-handed efforts to "civilize" the Native American population. Dragged off his reservation by Indian agent John Walton (Larry Steers), Wing Foot (Philip Anderson), the 9-year-old son of a Navajo chief, is forced to speak English and acclimate himself to the ways of the white man. When Wing Foot refuses to salute the American flag, he is brutally whipped by Walton, earning himself the unenviable nickname of Do-Atin, or "The Whipped One." Overcoming his initial resentments, the grown-up Wing Foot (now played by Richard Dix) becomes the first Indian to attend Thorpe College. He excels scholastically and also distinguishes himself as a star athlete, yet still he is subjected to the bigotry of his snobbish classmates. Nor are things any better when Wing Foot graduates from medical school and returns to his own people, hoping to replace their ancient superstitions with modern medical advances. Banished from his tribe for being "too white," Wing Foot finds himself literally a man without a country. Only when he discovers oil on the reservation and manages to avert a tribal war between the Pueblo and Navajo is Wing Foot fully accepted by the two worlds he now straddles. Far superior to The Vanishing American, Redskin is well worth seeing again, if only for the documentary value of its location-filmed Technicolor sequences.

Fittingly sympathetic to the Indians.

There are no featured reviews for Redskin at this time.