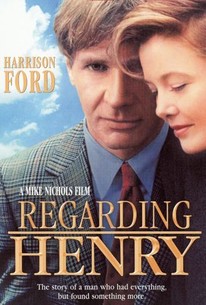 Critics Consensus: Although Harrison Ford makes the most of an opportunity to dig into a serious role, Regarding Henry is undermined by cheap sentiment and clichés.

Critics Consensus: Although Harrison Ford makes the most of an opportunity to dig into a serious role, Regarding Henry is undermined by cheap sentiment and clichés.

Critic Consensus: Although Harrison Ford makes the most of an opportunity to dig into a serious role, Regarding Henry is undermined by cheap sentiment and clichés.

Combining elements of A Christmas Carol and Rain Man (1988), this modern-day parable of greed and redemption was crafted with generous helpings of sentimentality by director Mike Nicholas. Harrison Ford stars as Henry Turner, a slick, ruthless corporate attorney willing to spin any falsehood to win a case. A bully to his teenage daughter Rachel (Mikki Allen), Henry also cheats on his wife Sarah (Annette Bening) and treats everyone from the maid to his assistant with cruel selfishness. Stepping out to a local mini-market for a pack of cigarettes late one night, Henry accidentally interrupts a burglary and is shot in the head by a stick-up artist. After a long coma, Henry survives only to find that he has no memory and must re-learn everything from reading to tying his shoes. Reborn as a friendly, childlike innocent, Henry charms his therapist (Bill Nunn) and reconnects with his wife and daughter, only to uncover some secrets about how truly appalling he once was.

John A. MacKay
as George

May Quigley
as Hillary

Critic Reviews for Regarding Henry

One can make excuses for a 23-year-old writer's misunderstanding of human behavior, but how could Mike Nichols look at himself in the mirror when he directed such dumbfounding scenes.

This is a film of obvious and shallow contrivance, which aims without apology for easy emotional payoffs, and tries to manipulate the audience with plot twists that belong in a sitcom.

Ford commits, but this mawkish script would barely pass muster on Lifetime, taking the easy route any chance it gets, with an aggravating routine of rich white people feeling bad for rich white people.

Lack of realism is not the problem of this Mike Nichols' drama; it's the simplistic messages and the time-worn cliches that make it flawed--despite good acting from Harrison Ford in the lead.

Soap opera, to be sure, but reasonably entertaining

Audience Reviews for Regarding Henry

Ford is great but he has to be in order keep this movie even close to average. Full review later.

A beautiful, sad, yet hopeful movie. I loved it. I think it's Ford's best dramatic role I've seen. If you're a fan of his, you have to see this.

A great film showing how quickly your life can change. Ford gives a very strong performance as a man who goes from one extreme to another after being shot.