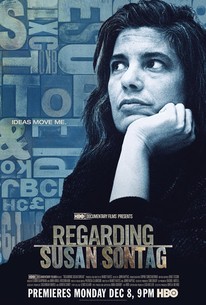 HBO's REGARDING SUSAN SONTAG follows the writer, cultural critic and activist through a life marked by moral conflict and public controversies, peopled with fascinating characters. Weaving archival clips and images with interviews with those who knew her well, the film chronicles Sontag's rise to fame as one of the twentieth century's most dynamic thinkers as it explores the private realm of her sexuality, self-image and personal relationships. An HBO Documentary Film. (100 min.) (c) HBO

Critic Reviews for Regarding Susan Sontag

While it would be easy to create a sterilized portrait of the accomplished intellectual, Kates refrains from doing so.

If you take a less passive approach to the film and connect the multiple dots Kates and co-writer John Haptas have positioned through the 105-minute film, you'll begin to understand what made [Sontag] tick.

This... makes for a highly watchable film.

You're left with the feeling that Ms. Kates was drawn to Ms. Sontag as a personality and a sexual and political symbol but didn't really take seriously the work she devoted her life to.

As Kates's documentary makes clear, few authors seized as fully the range of experience, intellectual and physical, that the writing life allowed, and used it to help with the crucial naming of their world.

Highlighting the personal sphere of the self-proclaimed "genius-schmuck" here seems not only justified, but important.

There are no featured reviews for Regarding Susan Sontag at this time.