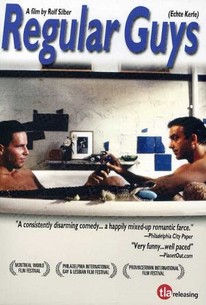 Aimed at mainstream audiences, this German sex comedy centers on Frankfurt police officer Cristoph who gets blind drunk after his girl friend breaks up with him and ends up the next morning in bed with Edgar, a homosexual auto mechanic. Poor Cristoph is beside himself trying to figure out whether or not he and Edgar.... Unfortunately, his bedfellow refuses to tell him. Cristoph returns home confused. Things get worse when a series of mistakes causes him to lose his apartment and move to Edgar's for a while. At work the hapless cop and his team get in big trouble when the arrest the wrong person. It's then he learns Edgar's true vocation. If this weren't enough, his colleague Helen, who could be a lesbian, seems terribly attracted to him. ~ Sandra Brennan, Rovi

There are no critic reviews yet for Regular Guys. Keep checking Rotten Tomatoes for updates!

There are no featured audience reviews yet. Click the link below to see what others say about Regular Guys!