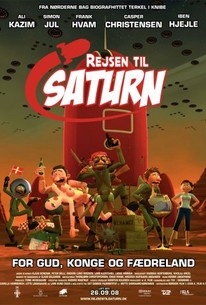 As a CG-animated adaptation of a popular Scandinavian comic book by Danish author/illustrator Claus Deleuran, co-directors Craig Frank, Kresten Vestbjerg Andersen and Thorbjørn Christoffersen's Rejsen til Saturn (Journey to Saturn) gently sends up science fiction genre as it throws in irreverent contemporary elements. The tale concerns Per, a young man tapped to serve as navigator on a Danish space flight to Saturn, the sixth planet from the Sun. But Per, truth be told, is on a fool's errand: little does he realize that Saturn has already been colonized - and that the infrastructure in his home country of Denmark now threatens to crumble because its take-no-prisoners desire for an empire and unfettered greed are driving it into areas not merely unproductive but dangerous. Performers including Ali Kazim, Frank Hvam, Simon Jul Jorgensen and Casper Christensen provide some of the voices on display.

Casper Christensen
as Per Jensen

Critic Reviews for Rejsen til Saturn

There are no critic reviews yet for Rejsen til Saturn. Keep checking Rotten Tomatoes for updates!

There are no featured reviews for Rejsen til Saturn at this time.