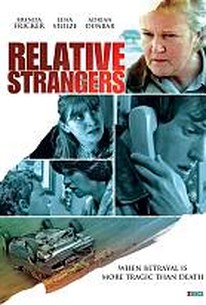 Betrayal proves more tragic than death in this tale of a newly widowed wife and mother who discovers that her late husband had been secretly married to another woman. Maureen Lessing (Academy Award-winner Brenda Fricker) always thought she knew her husband better than anyone else, but when he died she discovered that her happy marriage was nothing more than an illusion. Upon confronting the other woman, Maureen is devastated to learn that the couple also had a child together. Now, in the darkest depths of despair, Maureen will be confronted with the unthinkable. When the little boy from her husband's other marriage falls gravely ill, his only hope for survival lies with Maureen's ability to put aside her pain, and turn to her own children for help. ~ Jason Buchanan, Rovi

There are no critic reviews yet for Relative Strangers. Keep checking Rotten Tomatoes for updates!

There are no featured reviews for Relative Strangers at this time.