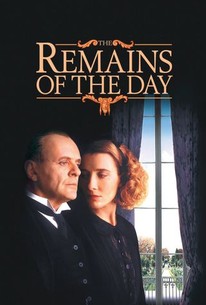 Critics Consensus: Smart, elegant, and blessed with impeccable performances from Anthony Hopkins and Emma Thompson, The Remains of the Day is a Merchant-Ivory classic.

Critics Consensus: Smart, elegant, and blessed with impeccable performances from Anthony Hopkins and Emma Thompson, The Remains of the Day is a Merchant-Ivory classic.

Critic Consensus: Smart, elegant, and blessed with impeccable performances from Anthony Hopkins and Emma Thompson, The Remains of the Day is a Merchant-Ivory classic.

The Remains of the Day Videos

The Remains of the Day Photos

Filmed with the usual meticulous attention to period and detail of films from Ismail Merchant and James Ivory, The Remains of the Day is based on a novel by Kazuo Ishiguro. Anthony Hopkins plays Stevens, the "perfect" butler to a prosperous British household of the 1930s. He is so unswervingly devoted to serving his master, a well-meaning but callow British lord (James Fox), that he shuts himself off from all emotions and familial relationships. New housekeeper Miss Kenton (Emma Thompson) tries to warm him up and awaken his humanity. But when duty calls, Stevens won't even attend his own dying father's last moments on earth. The butler also refuses to acknowledge the fact that his master is showing signs of pro-Nazi sentiments. Disillusioned by Hitler's duplicity, the master dies an embittered man, and only then does Stevens come to realize how his own silence has helped bring about this sad situation. Years later, regretting his lost opportunities in life, he tries once more to make contact with Miss Kenton, the only person who'd ever cared enough to seek out the human being inside the butler's cold veneer. ~ Hal Erickson, Rovi

Angela Newmarch
as Waitress
View All

News & Interviews for The Remains of the Day

View All The Remains of the Day News

Critic Reviews for The Remains of the Day

Beautiful to look at and deeply moving in many scenes.

The actors keep this interesting, but as a story it drifts and rambles.

All the meticulousness, intelligence, taste and superior acting that one expects from Merchant Ivory productions have been brought to bear.

Who else but Merchant Ivory to give the big-screen treatment to Ishiguro's Booker Prize-winning novel about class, fascism and the stiff upper lip?

Here's a film for adults. It's also about time to recognize that Mr. Ivory is one of our finest directors, something that critics tend to overlook because most of his films have been literary adaptations.

What do you call filmmakers who make literary entertainment box office in the age of Beavis and Butt-bead? Try miracle workers.

Like The Age of Innocence, here's another handsome period piece about a man who foolishly ignores the dictates of his heart.

The movie looks splendid. Arcadian views and honeyed filters have been largely resisted. But the content, that is to say, the script, has problems.

Just gets better with age.

Moves rather slowly, but the actors and their understated chemistry keep the film riveting, building to a climax that is absolutely heartrending.

Merchant-Ivory's best film by a mile.

Audience Reviews for The Remains of the Day

A beautifully wrought piece about the dangers of living through the affairs of aristocracy, this film is the embodiment of the Merchant-Ivory set of films while also being a fairly faithful adaptation of the book by Kazuo Ishiguro. Though the book is well represented and the overall message and grandeur of the film was in no way affected, I did take issue with several liberties that changed scenes in the book, raised questions that needn't be, and arguably some choices were simply unavoidably strange. Characters were merged, POVs were changed, and undertones were glaring. But I digress, this film does justice to the text by showing the incomparable Anthony Hopkins in a role that could only belong to him. His instincts as a servant and as a man with "dignity," as he espouses, truly embodied the character of Stevens. He seemed bland, yet affected, kind yet unbothered, and clinical while being personable and repressed. Oh, was he repressed. So enters Emma Thompson as Miss. Kenton, the housekeeper who keeps Stevens on his toes and challenges his pre-conceived notions. Their relationship really is the entire film, while also being about loyalty to someone who is blindly being led astray themselves in a long train of unforgiving ignorance. Stevens though, is a character whose psyche just goes deeper and deeper, a well of misgivings and fraudulent narration, unreliable in his own emotions and the way the facts of the film are presented. You want him to rendezvous with the one he longs for, but he is tethered by the belief that he has a grand purpose, and if he doesn't see it through than his entire life has been wasted. Next to Random Harvest this is the saddest film I have ever seen, because it rallies around an idea as old as time, and then doesn't see it to fruition. It's about longing, love, manipulation, and the callous reality that a life worth living is not expected to always be great. I find this film, and the book it is based off of, to be beautiful and poignant in its tender recognition of humanity. Though I don't agree with some decisions by the screenwriter and director, I do agree that this was a film that was difficult to put together, as there was first person narration in the book and none here. It really was a film that achieved on a level unexpected, and stayed heart warming throughout.

While the movie was full of excellent performances, the story itself didn't leave an impression strong enough on me (yeah, again expectations were high, thanks to IMDb ratings). Besides, the execution wasn't effective enough to keep me glued to the movie. If anything was done quite right, it was the casting of the movie. That's what made this 2+ hours journey tolerable for me.

I am a sucker for starched-collar, buttoned-down romance, and this movie is pretty much the definition of that. Also, it has old people. I LOVE old people love stories. Ishiguro I'm not too crazy about, but I can forgive him.

A masterfully acted, well told story featuring an unassuming butler (Anthony Hopkins) who remembers back to the time when he began to discover disturbing new things about the master (James Fox) he had served for many, many years. Although admittedly slow-paced, this film is largely fascinating due to the main plot concerning Nazi sympathizers. The movie also adeptly explores an important trait in loyalty - all with a magnetic and versatile actor in Anthony Hopkins leading the way. Both Hopkins and Emma Thompson (as another worker at the house who finds Hopkins' both attractive and infuriating) give outstanding turns, and the movie also ends on a satisfying note. What I love most about this film is that it never betrays us with the way it covers its characters, they stay true to form and never feel artificial for one moment.

The Remains of the Day Quotes