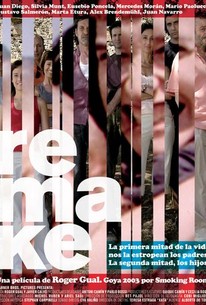 Four years after cresting the pinnacle of cinematic acclaim with his comic festival hit Smoking Room (2002), Spanish writer-director Roger Gual returns with a sophomore outing, Remake (2006). Though this film will inevitably earn critical comparisons to such prior efforts as The Big Chill and Peter's Friends for its ensemble-in-a-house setup, Gual - unlike the directors of those prior efforts- aims straight for dark, multilayered, probing drama on themes of intergenerational disillusionment. The story concerns a tightly-knit group of four 1960s leftist radicals (two men and two women) who formed a hippie commune circa 1968-9, in a Catalunya farmhouse, and proudly upheld a "nontraditional" parental approach that shunned discipline. Over the forty years that followed, these onetime "revolutionaries" paired off, got married, raised their kids and settled into affluent, upper-crust bourgeois lifestyles. They now gather for a reunion in the same farmhouse, accompanied by their grown children, and by the fifth member of their old clique, Max (Mario Paolucci). As the sole remaining resident of the farmhouse, the wholly countercultural Max now plans to sell the property. As the weekend unfurls, the parents begin to project old super-8 movies of themselves from forty years prior, and must simultaneously confront the loss of their 1960s idealism and the ill-adjusted natures of their children, who blame their parents' non-conformist ways for their innate unhappiness and inability to succeed in the everyday world.

There are no critic reviews yet for Remake. Keep checking Rotten Tomatoes for updates!

A weekend with your parents in an old farm house where you discover you have made the same mistakes they did in the past, you are a remake of them. funny dramedy that lies heavily on dialogue.