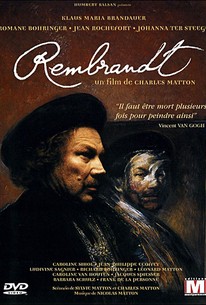 Klaus Maria Brandauer stars in this gorgeously photographed French-German-Dutch biopic on the life of 17th century Dutch master Rembrandt van Rijn. Told in flashbacks from the point-of-view of the aged artist, the film opens as the young van Rijn arrives in Amsterdam. Soon after establishing his career as a painter, he marries the radiant Saskia (Johanna ter Steege). As he makes a name for himself, he can soon afford to buy a large house by teaching wealthy aristocrats how to paint. However, the couple's happiness is short-lived; Saskia dies soon after bearing their son, Titus. Crushed, van Rijn seeks comfort first in the arms of his maid Geertje (Caroline van Houten) and then with his second wife, Hendrickje (Romane Bohringer), who gives birth to a daughter. In spite of his genius, van Rijn's determinedly eccentric behavior alienates the very members of the elite who were paying his bills. At one point, the artist's home and belongings, including many of his paintings, are seized and sold for humiliatingly low prices in a rigged auction. Rembrandt was directed by painter-turned-director Charles Matton. ~ Jonathan Crow, Rovi

There are no critic reviews yet for Rembrandt. Keep checking Rotten Tomatoes for updates!

There are no featured reviews for Rembrandt at this time.