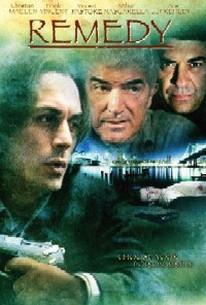 Christian Maelen served as both star and director in this offbeat independent crime drama. Will Bentley (Maelen) leads a charmed life -- he has inherited a fortune from his parents, he has a beautiful girlfriend, Michelle (Candice Coke), and his career as an artist is starting to take off. But Will also has a serious drug problem that causes all of his luck to run out one evening; after getting high at a party, Will was with a close friend when he was shot on the street. Now that Will's head has cleared, he remembers almost nothing about the evening, but it turns out his pal owed plenty of money to some powerful people, and between the police and the mob, Will finds himself dragged into a labyrinth of danger. Remedy co-stars Frank Vincent, Vincent Pastore, Rick Aiello, and former Kiss guitarist Ace Frehley, who also contributes to the soundtrack.

Christian Maelen
as Will Bentley

Megan Mcnulty
as Girl at Party

There are no critic reviews yet for Remedy. Keep checking Rotten Tomatoes for updates!

There are no featured audience reviews yet. Click the link below to see what others say about Remedy!