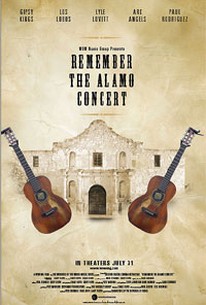 Remember the Alamo concert paid tribute to the historic Alamo shrine and the City of San Antonio in a performance event made of the history books. The concert, featuring Lyle Lovett, the Gipsy Kings, Los Lobos, the Arc Angles and Paul Rodriguez, retold the story of the incredible 13-day battle that took place on these hallowed grounds and will serve to further solidify the Alamo shrine as a historical wonder of early American culture. All artist performances were filmed and formatted in HD for Theatrical Release and DVD including an HD documentary on the Alamo shrine, downtown San Antonio, the San Antonio River walk, the "Haunted" Menger Hotel and home to Roosevelt's Rough Riders and finally with a unique insight into "Fiesta" San Antonio. The Remember the Alamo concert captured the sights, sounds and animation of San Antonio including the musical and geographical history of the artists that participated in the concert and the unique blend of music that makes Texas music so diverse.

There are no critic reviews yet for Remember the Alamo Concert. Keep checking Rotten Tomatoes for updates!

There are no featured reviews for Remember the Alamo Concert at this time.