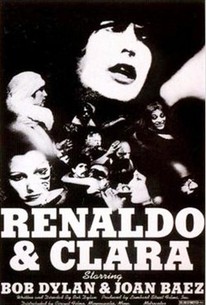 Bob Dylan made this concert film that chronicles a 1975/1976 performance of his Rolling Thunder Revue. In between songs he, his wife Sara Dylan, along with Joan Baez, Allen Ginsberg, and other counterculture figures perform philosophically based improvisational pieces. During the skits, Dylan plays the ambiguous Renaldo, while Ronnie Hawkins and Ronee Blakely play Dylan and his wife. Songs include "Isis, I Want You," "It Ain't Me Babe," "Knockin' on Heaven's Door," "Hurricane," "Romance in Durango," "One Too Many Mornings," "One More Cup of Coffee," "Sara," "Patty's Gone to Laredo," "Just Like a Woman," "A Hard Rain's Gonna Fall," "Sad-Eyed Lady of the Lowland," "When I Paint My Masterpiece," (Bob Dylan), "Chestnut Mare" (Roger McGuinn), "Diamonds and Rust" (Joan Baez), "Suzanne" (Leonard Cohen), "Need a New Sun Rising" (Ronee Blakely), "Salt Pork West Virginia" (Jack Elliott), "Kaddish" (Allen Ginsberg), "Cucurrucucu Paloma" (Tomas Mendez), and "Time of the Preacher" (Willie Nelson).

Joan Baez
as Woman in White

Critic Reviews for Renaldo and Clara

It's not just people previously unexposed to Dylan who are likely to be repelled by his arrogant passivity; even those who idolized him in the sixties may gag a little.

The film contains more than its share of dead weight, but it is seldom genuinely dull.

The film maintains and expands Bob Dylan's own myth, his vague ideas, and his magnificent concerts alongside Joan Baez and other artists... For all this, Renato and Clara is a must-watch. [Full Review in Spanish]

It all looks pretty silly. The concert footage is all right, but the in-between stuff just has to go.

The film can be recommended only for die-hard Dylan fans with a lot of spare time on their hands.

Audience Reviews for Renaldo and Clara

There are no featured audience reviews yet. Click the link below to see what others say about Renaldo and Clara!