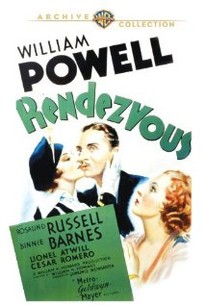 This espionage thriller with romantic comedy touches was loosely based on the book American Black Chamber by the real-life head of the U.S. Secret Service during World War I, Herbert O. Yardley. Bill Gordon (William Powell) is a newspaper puzzle editor who becomes a lieutenant in 1917 when he enlists to fight in the First World War. Before shipping out, Bill meets and becomes attracted to Joel Carter (Rosalind Russell), the niece of John Carter (Samuel Hinds), the Assistant Secretary of War. When Joel learns about Bill's former occupation, she arranges for his transfer to the War Department, where he is put to work code breaking for Major Brennan (Lionel Atwill). When Brennan is murdered as the result of a German-Russian spy ring's machinations, Bill investigates the spies and a comely secret agent (Bonnie Barnes), which jeopardizes his newfound romance with Joel. Russell received the role because MGM's first choice, Myrna Loy, was refusing to work for the studio at the time. ~ Karl Williams, Rovi

Larry Steers
as Extra in Church

International spy pictures, even the poorer ones, are always bound to be fairly exciting, and Rendezvous happens to be one of the good ones.

I couldn't understand the plot very well, but it runs on entertainingly, with Mr. Powell playing his customary role of Mr. Powell.

There are no featured audience reviews yet. Click the link below to see what others say about Rendezvous!