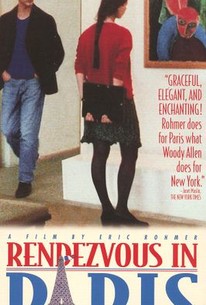 Chance meetings provide the central theme for this Parisian film comprised of three loosely related episodes. The first, "Le Rendez-vous de 7 heures," centers on Esther, who tries to make her womanizing boyfriend jealous by finding her own new lover. She finds a likely candidate in a Montmartre market; they begin talking and agree to meet at the Beaubourg cafe that night. There, he steals her wallet. Later a stranger returns it. The stranger mentions that she must go to the Beaubourg to meet her ex-lover. Esther accompanies her and gets a big surprise. In the second episode, "Les Blancs de Paris," two would-be lovers hold a series of conversations in various Paris locales. The problem is that she is trying to find the courage to leave her fiancé. The new man, a young professor, asks her to move in with him. Instead, they end up planning to spend three days in a Montmartre hotel while her fiancé is out of town. There the woman meets with an unfortunate coincidence. In the last vignette, "Mere et enfant 1907," an artist and his Swedish lady friend go to an art gallery. There the painter sees a young woman admiring Picasso's 1907 canvas Mother and Child. He then abandons his friend and takes off after the woman through the winding streets. Eventually, he ends up at her studio where he meets with disappointment.

Aurore Rauscher
as The Woman

Serge Renko
as The Man

Michael Kraft
as The Painter

Bénédicte Loyen
as The Young Woman

Mathias Mégard
as The Flirt

Olivier Poujol
as The Waiter
View All

Critic Reviews for Rendezvous in Paris

It's a film that stands as one of the New Wave director's most enjoyable, and a beautifully frank take on the highs and lows of that foolish little thing called love.

There are bits of the three-episode Rendezvous in Paris that are, if not like watching paint dry, like watching the painter spackle the picture-hook holes and edge around the windows.

Somehow Rohmer keeps it fresh, if only because, after more than 30 years of making the same movie, there can be no doubt he's sincere.

As inspiring as his faith in the written word may be, and as elegantly written as his characters' long verbal encounters often are, it's hard not to wish for a few transcendent images to burn them into our memory.

One of the best of his works.

Time for Rohmer to retire.

Each vignette is fine, as far as it goes, but none go very far.

What a wonderful world. Sure, people cheat on each other. But they also act honorably and speak honestly and admit the darkest secrets about themselves. This sort of movie might bore you to tears, but it also might be just what you've longed for.

Besides the wonderful scripting, there are quite a few winning performances, especially from Bellar, who's utterly charming in both her vulnerability and optimism, and Rauscher, an acting newcomer.

The actors are mainly a bunch of unknowns, but all deliver strong performances. Their screen presence is incredible, and the camera is love with them.

There are no featured reviews for Rendezvous in Paris at this time.